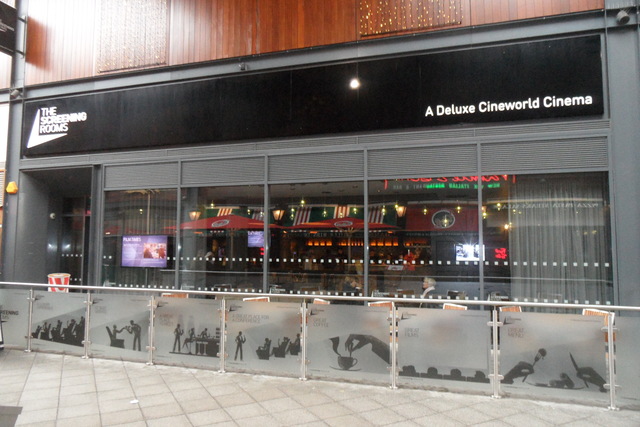 In Cheltenham, Gloucestershire, this luxury cinema was opened by Cineworld in June 2011, adjacent to their existing 11-screen multiplex in The Brewery, Oxford Passage. There are three screens, each with 40 seats, situated behind a bar/lounge. In the auditoriums there are tables between the large, luxurious seats, and sufficient leg-room to allow easy-access for the waitress service. The cinema has a separate entrance - and website - to the Cineworld multiplex. This was officially stated to be a trial; to date (March 2015) no further Screening Rooms have been announced.

The Screening Rooms was closed on 21st January 2019 to undergo a massive refurbishment and expansion into the adjoining former sports bar-Apres. Completion was expected in Autumn 2019. By 2021, the three Screening Rooms were merged into the existing 11-screen Cineworld multiplex (which has its own page on Cinema Treasures) increasing the number of screens to 14 with a total seating capacity of 1,659.