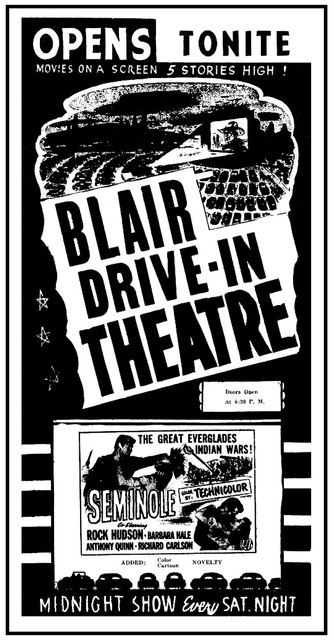 The Blair Drive-In was opened on May 6, 1954, screening the 1953 western “Seminole” featuring Rock Hudson, Barbara Hale ands Anthony Quinn. The drive-in was built by Sam H. Blair with his son Dan Blair. Blair also owned the Blair Theatre in Belleville and his son was operating the Smith Center Drive-In in Smith Center, KS at this time. The new Blair Drive-In had a capacity for 250 cars along with sound/projection equipment by Ballantyne Theatre Equipment. The wooden CinemaScope screen tower was 56ft by 52ft. Neil Carlson was the manager of the new drive-in. His family lived in an apartment that was built on the second floor of the concession/projection building. In 1955, W.L. Terrill replaced Carlson as the manager of the drive-in.

In looking at movie advertisements for both theatres, Commonwealth Theatres opened the drive-in in the summertime and the hardtop Blair Theatre was closed except for Sunday matinee only. During winter the hardtop was open and the drive-in closed. This rotation was used in the 1950’s and into the 1960’s for both theatres. In 1962 Glenn Shulda took over as the manager of both theatres. In February 1965, before the reopening of the 1965 movie season, the screen tower was widened 24ft. Glenn Shulda is quoted in saying “It is being widened to enable the showing of a larger, more complete picture”. Commonwealth Theatres bought the Blair Theatre and the Blair Drive-In from Sam Blair in 1966. In November 1981, after closing for the season, part of the screen tower got blown down by high winds. Unfortunately Commonwealth Theatres were not interested in replacing the wooden screen tower so that sealed the fate of the Blair Drive-In for good. In 1983, Commonwealth Theatres sold the property and the new owners planned on using the basic structure that housed the former two-story concession stand/projection booth for a new home. The remaining seven acres were to be used as a horse farm. Eventually, that house burnt down and a new house was built on the property.

A closer address (at least for Google) is 420 County Road 17, Belleville, KS. The drive-in was located just to the north near the point where County Road 17 meets Old Highway 81. http://tinyurl.com/hbfbdl5