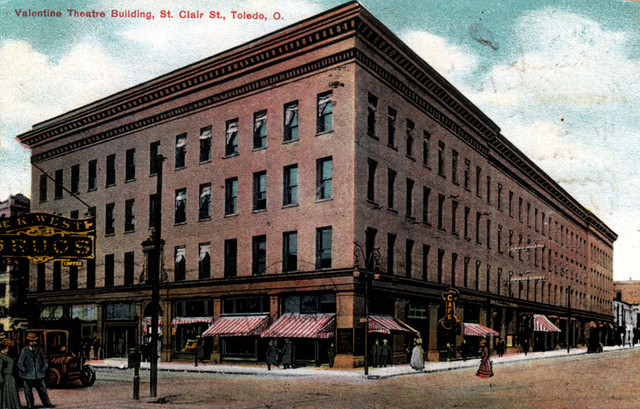 Located on Adams Street at N. St. Clair Street. The Valentine Theatre opened on December 25 1895 with Joseph Jefferson in ‘Rip Van Winkle’. It was designed in a Sulivanesque style by architect E.O. Fallis. In 1918 Loew’s took over the lease and it became Loew’s Valentine Theatre. It was converted to an Art Deco/Oriental styled auditorium in a major overhaul of its interior in 1942 by the architectural firm of Rapp & Rapp, and was most likely one of architect George Leslie Rapp’s last projects as he died in 1941.

Another remodeling took place in the 1960’s in which the theatre, at the time run by the Armstrong Theatre chain of Bowling Green, OH (which owned it for 10 years after Loew’s abandoned it), turned it into a 70mm-Cinerama house.

A new projection booth was built on the main floor, thus abandoning the upstairs booth, and a custom made Cinerama screen was installed, changing the front of the auditorium by removing the proscenium and stage. This turned the Valentine Theatre into a state-of-the-art cinema. The opening movie was “It’s a Mad, Mad, Mad, Mad World”.

Another, interpretive renovation was completed in 1999 long after the Valentine Theatre had ceased showing movies.

In addition to the article Tinseltoes linked to, that issue of Boxoffice features a photo of the foyer and main stairways of the remodeled Valentine used as the cover plate of the magazine’s The Modern Theatre section.

Roger, the Valentine’s original entrance was on St. Clair Street, where it remained until the renovations of the 1990s. When the theater was renovated an addition was built on the Adams Street side of the building with a new entrance in it. The unrelated building the Victory/Metro Theatre was in was probably demolished ages ago.

the syndicated comic strip “Crankshaft”, which is set in Toledo, is currently running a story on a Valentine Theater. This small theater is facing closure if it can’t convert to digital projection.

As the Valentine Theatre is primarily a live performance venue, and pretty solidly booked, I don’t see how the lack of a digital projector could be a problem for them. It certainly isn’t going to close.

I was only commenting on the similar names. The Valentine in the comic strip is an imaginary neighborhood theater. The name just struck me, that’s all. And the relevance of the necessity for small theaters t go digital or go dark.

Ah, I didn’t see the “a” and imagined that it said “the.” Reading too fast again.

A couple of before and after photos on their website. It looks like a lot of the lobby décor is original, and the auditorium looks mostly new, but from the before photo, not much was left restoring anyway- the previous renovations were fairly bland. It looks nice now.

The website shows classic films being screened. Function should also include: Movies, classic.