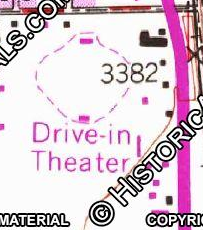 The Hermosa Drive-In was located on the SE side of Artesia. It was built and opened in the late-1950’s-early-1960’s. It was operated by Ray Bartlett. It was closed in 1988 and was demolished.

Today, Artesia RV Park & Storage sits on the property with no trace of the drive-in left save for the overall outline and the entrance/exit road.

I worked at the Hermosa Drive In theater in 1967 as a projectionist. an helped out at the LandSun indoor theater.

During my time at The Hermosa we had just put up a 24 sheet billboard poster for a Beatles movie when the uproar about the alleged Beatles comments on god and everyone was banning any thing to do with them. This was around August 1966 according to the internet. We had to remove the poster and replace it with another film title. The projection booth had 2 Simples XL 35 projectors, Strong Futura carbon arc lamp houses, and Super Panatar anamorphic lenses. the sound system was still speakers on posts.

The FDY of 1956 lists a Circle B Drive-In for Artesia; a small detail, I know but I wanted to confirm that the “Circle B” is one and the same as the Circle Drive-In/Hermosa Drive-In AND can someone please clarify if this “Circle B” is actually a third name this theatre had over the years or simply a typo either on part of the FDY editor adding a “B” where there shouldn’t be one othe CT contributor omitting one.

I’d assume “Hermose” was a misprint for Hermosa (?) but still, that listing clearly leads one to believe that The Hermosa and Circle B were two separate theatres running at the same time. Is that possible? Did Artesia have 2 different ozoners (regardless of whether they were operational at the same time or not)?

Aha! I found a second drive-in theater site in the 1955 topo map on Historic Aerials. The Circle B was on the west side of town at 3706 West Main Street, and Google Street View still shows the concrete driveway-to-nowhere there. (It’s also on the 1978 topo map there, and the 1997 aerial photo shows more suggestion of ramps.)

So the Circle B was different than the Hermosa. The MPA mentions above suggest that the Circle B closed in the early 1960s but stayed intact enough for the 1978 topo map to include it.

Also, I just made this clipping from the Current-Argus of July 6, 2008. It’s a long retrospective of Bill Bartlett, son of Ray, who ran the motion picture business of Carlsbad and Artesia. In particular, his dad “had the Valley Theater and Hermosa and Circle ‘B’ drive-ins running at different times in Artesia.”

Thanks NeonMichael for the comments on the drive in’s. I was not aware of the Circle B drive in. Please excuse any typos as I am now almost blind. In my earlier post on 2015 that has some info the Hermosa that was on Hermosa Drive. I still have my paycheck stubs from Bill Bartlett, I was still in 10th grade High School, and would run movies on weekends when the senior projectionist would run the LandSun theater downtown. I sure wish I could remember that projectionist name, he was certinallly a great mentor for me. There was also a restaurant down the street that had once been a theater that we would sometimes go scavenge for the LandSun.

The Beatles film mentioned might be the same film found on an episode of American Pickers?

Boxoffice, Dec. 29, 1951: “ARTESIA, N. M. – Another drive-in is planned for this area. Ray Bartlett, owner of the Landsun and Ocotillo theatres and the Circle-B Drive-In, has purchased a site about three and one-half miles south of town, and is planning for an Easter opening of the new project. Because of the steel shortage the tower will be constructed of wood. It will be replaced when steel becomes available. Bartlett plans to use first runs in one drive-in and subsequent runs in the other.”