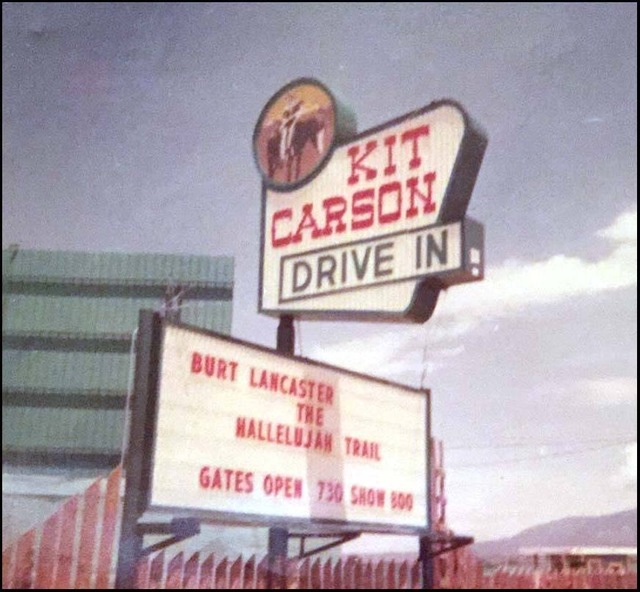 The Kit Carson Drive-In sat on the SE side of the town. It was open in May 1956 and in March 1970 it was taken over by Dollison Theatres. It closed on September 1, 1984 with Harrison Ford in “Indiana Jones and the Temple of Doom”.

Today, a Wal-Mart sits on the property with no traces of the drive-in left.

Boxoffice, Aug. 10, 1957: “A bolt of lightning ripped through the Kit Carson drive-in, Taos, N. M., digging a ditch up to three feet deep across the ozoner. The storm took place in the afternoon. A bulldozer was utilized to put the ramps back in shape for the show at night.”

Boxoffice, July 2, 1962: “William Beutler is taking over operation of the Kit Carson Drive-In from the former operator, H. F. Taylor.”

Boxoffice, May 18, 1964: “The screen tower of the Kit Carson Drive-In, Taos, N.M., was blown down and owner William Beutler expects to have a new screen installed within a few weeks”

Boxoffice, April 20, 1970: “The Kit Carson Drive-In … was acquired in mid-March by Dollison Theatres, it was announced by president Les Dollison. … He said company policy dictates that X-rated movies not be shown on weekends, traditionally "family night” in his theatres."

Taos News, Sept. 6, 1984: “When Kit Carson Drive-In’s screen faded Saturday night (Sept. 1) on "Indiana Jones and the Temple of Doom,” the drive-in scene may have gone dark in Taos County for good. Drive-in owner Les Dollison sold the four acres for a rumored $600,000 to Wal-Mart Stores, Inc. He is looking for another location, but associates say the cost of land and zoning restrictions may prohibit building anew. No one remembers the title of the first movie when the drive-in opened in 1954. The founder was a man remembered only as Mr. Taylor, a Texan, who later sold to Billy Buetler … Former manager Eddie Rimbert remembers screening R-rated movies briefly in the mid-70s. The 365-car parking lot would be deserted, but when a Disney film was on the screen, families packed the drive-in."

Later issues confirmed that the Wal-Mart began construction on the site in the summer of 1985. And that at least part of the Kit Carson’s old sign is now used for the Rodeo de Taos.