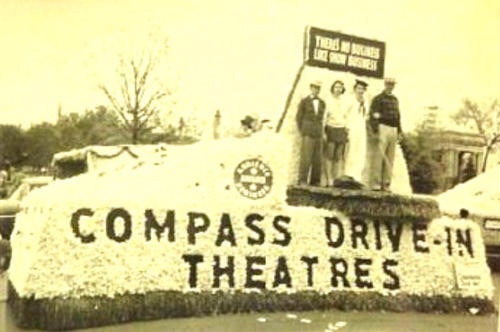 Located in the Northeast Park Hill district of Denver at E. 40th Avenue and Monaco Parkway. The Monaco Drive-In was opened July 13, 1950 when it was operated by Lee Theatres. They still operated the drive-in in 1955. In February 1956 it was taken over by Wolfberg Theatres. It was closed on October 4, 1977.

My name is Frankie Clark Sr. I Live there back in 1957 my email

Monaco Drive-in Theatres Monaco & Smith Road Denver Colorado. I live there this is my theatres

The Monaco drive-in opened on 7/13/50. The first ad announcing the switch from the Lee Theatres to John Wolfberg’s Compass Drive-ins was run 3/9/56. I m putting together a series of books on the Denver area’s drive-ins and indoor theatres. If anyone has any questions, I’d be happy to share my research with you. Thanks ! – Ken Mitchell

A more accurate address for this theater is 3975 N Monaco Pkwy, Denver, CO 80207. This points to the drive in. Now Red Bull Distribution Center.

From the May 28, 1955 issue of Billboard: “Unseasonably long and heavy dust storms have cut into outdoor business in Denver where smaller box offices have been hurt even more by extensive damage to equipment. Lem Lee, owner of three drive-ins in Denver, estimates that between 500 and 1,000 speakers had to be replaced in one week at the Monaco Drive-In. Over a 30-day period nearly 4,000 speakers have had to be repaired or replaced.”

Maybe Lee and Rothman sold because they were fed up with not being able to bid on first-run movies? Variety reported that on Jan. 24, 1956, “Kar-Vu Theatres Inc., operating the Monaco and Centennial drive-ins, has sued eight distributors and two theatre companies.”

The May 24, 1950 issue of The Exhibitor provided a few more details, including a reason why Lee’s company was called Kar-Vu:

“The Kar-Vu Drive-In, first to get an inside-Denver permit, will feature an unusual setup in the concession stand. It will be of a horseshoe type, 60-feet long, and will be operated cafeteria style, with two cashiers to speed up operations. The refreshment stand will feature many items, including fried chicken, popcorn, etc. In order to get rapid turnover, customers will not be able to see the screen while in the refreshment stand. The ozoner will have room for 726 cars and about 150 walkins, will cost about $145,000, and will be opened next month.”

Boxoffice, April 5, 1976: “Wolfberg Theatres has one less drive-in this year. The lease expired and was not renewed on the 700-car Monaco, Denver. Paul Rothman, the owner, is operating the theatre, with Robert Jones as manager.”

I’ve put together a booking history for the Monaco Drive-in, from 1950 up to 1978 so far, in case anyone might like to know when a particular movie played there. I’ll be happy to share my research with you. Take care – Ken Mitchell ()