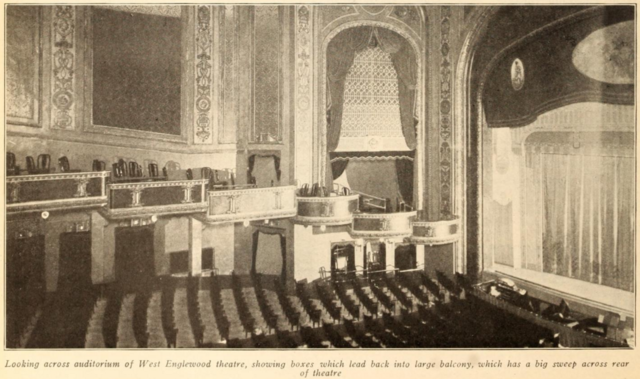 The Hippodrome Theatre opened in 1912 in the West Englewood neighborhood of Chicago’s South Side, and was built for the Ascher Brothers circuit. It was located near the intersection of W. 63rd Street and S. Ashland Avenue, not far from Ogden Park. Both movies and vaudeville acts were featured in its early years. Renamed Atlas Theatre in 1918, in 1920 it became the West Englewood Theatre. In the mid-1920’s, Bob Hope worked at the West Englewood Theatre, appearing as an emcee. By 1929 it was operated by the Cooney Brothers National Theaters Corp. circuit.

In 1936, Warner Brothers, which ran the theatre from the 1930’s into the 1950’s, had the theatre completely remodeled in Art Moderne style by the firm of Pereira & Pereira. After a brief closure, it reopened, renamed the Ogden Theatre, with movies only on September 9, 1936 with Ross Alexander in “Brides Are Like That”.

I believe this theater was known (even before it was the West Englewood) as the Hippodrome in 1910.

The first day of the demolition of the Ogden Theater was Friday, July 27, 1962, by the State Wrecking Company, 3415 So. Kedzie Avenue.

Here is a January 1915 ad from the Suburbanite Economist:
http://tinyurl.com/r83pb6

Spent many a Saturday afternoon at the Ogden in 1940, only needed 5 cents for the movie, and 5 cents for pop corn.

The principals of Pereira & Pereira, the firm that did the 1936 remodeling of the West Englewood Theatre, were William Pereira and Hal Pereira. Percival Pereira was an older architect who was never a member of this firm.

The 1915 ad linked by kencmcintyre says that the Marlowe Hippodrome Theatre was at 63rd Street and Stewart Avenue. The Hippodrome at 63rd and Ashland (or Marshfield) was a different house. I found a 1915 reference to a business at 1621 63rd in the Hippodrome Building, which would put it pretty close to the corner of Marshfield.

The West Englewood/Ogden must have been the proposed theater in this item from The American Contractor of October 4, 1919:

6301-11 Marshfield would be at the southeast corner of Marshfield and 63rd. Items in the same journal later that year indicate that contracts had been let and construction was underway before the end of 1919. An item in the August 28, 1920, issue of the Forest Park Review said that Ascher Bros. new Englewood Theatre at 63rd and Marshfield was expected to open by January 1, so by that time the project would have taken more than a year to complete.

I’m not sure if the old Hippodrome was just extensively rebuilt or was demolished for Ascher Bros. West Englewood Theatre. One possibility would be that Ascher Bros. acquired several lots along Marshfield Avenue behind the Hippodrome and built an entirely new auditorium there, cutting a new lobby through the existing building to 63rd Street.

Ascher Bros. had opened the Columbus Theatre on Ashland just off 63rd in 1915, but it was only half the size of the Ogden. Most likely they found business too brisk for the smaller house and built this theater to replace it. The Columbus was closed in 1926.

In 1927, the West Englewood Theatre was one of three south side houses that Ascher Bros. sold to the National Theatres Corporation, according to an item in the March 1 issue of Suburbanite Economist. The others were the Colony, at 50th and Kedzie, and the Highland, at 70th and Ashland.

The Hippodrome/Atlas must have been a very minor theatre on the site prior to the West Englewood, which was almost certainly built from scratch.

This opened as the Ascher’s West Englewood on December 30th, 1920 and reopened by Warner Brothers as the Ogden theatre on September 4th, 1936 and closed in 1963. Grand opening ads posted. No ads found for the Atlas name.

The Atlas name appears in at least a “Four Minute Men” list from 1918. I think the Hippodrome/Ashland Hippodrome/Atlas must have been a 299 seat type theater on the same site as it was not written about or advertised much at all. Most references to it are just lists of theaters showing serials. I can’t find anything about its construction. None of the articles about the construction of the West Englewood discuss remodeling an existing building.