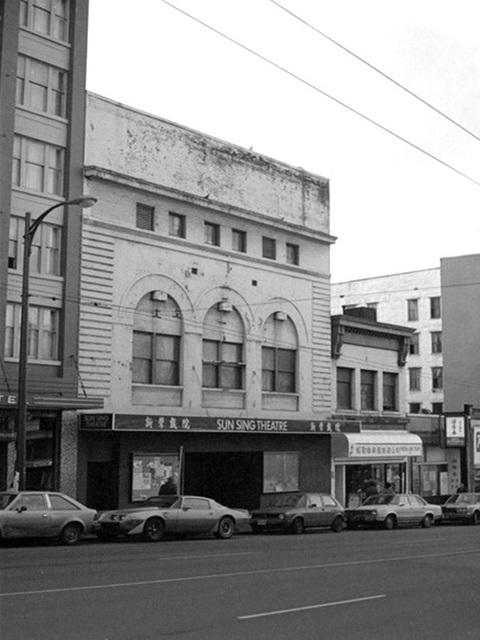 Opened in 1908, the first Pantages Theatre in Vancouver is the oldest remaining vaudeville theatre in Canada. Although it has been dark since 1994, the interior remained virtually intact from its heyday.

A grander new Pantages Theatre was erected in 1917 a couple blocks away at 20 West Hastings Street, but was torn down in 1967 to make way for a parking lot.

The Pantages Theatre Arts Society was planning to restore the original Pantages Theatre as a venue for live theatre. However by 2010, these plans had been abandoned. Architectural features were removed ahead of demolition in 2011.

as of mar 2005 there is still no known plans to save this absolute gem of a theatre
it is in EXTREME danger being located on the most run down crime ridden street in the city!
this theatre must be saved!!!!http://www.vcn.bc.ca/hrtgvanc/pantages.htm here are some pictures of this GEM!!!!!!!!!!!!!!!!!!

That Vancouver building at 152 East Hastings is the oldest theatre in Greater Vancouver, the oldest remaining Pantages theatre in North America, and one of the oldest purpose-built vaudeville theatre interiors in Canada. Yes slayerfan, it must be saved and it is going to be saved by people who believe there is no such word as “impossible”.
I cannot tell you everything because I only took the tour today but I would suggest that you get in touch with someone from the City Opera company and find out how and when to take a tour of this old falling apart building and get the news about what is planned for this fantastic old dame of a building.
I have no idea who or what building Barnaby is writing about unless it is the building along Hastings across from the Army and Navy that was torn down decades ago. The one at 152 East Hastings is a 650 seater not 1200.
I remember this theatre as the City Lights that showed Rocky Horror and all sorts anti drug movies, and Cheech and Chong movies that played in the mid 1970’s.
There is a lot of work being planned for this old building and buildings next to it as well. When all these things are finished Vancouver will have a wonderful intimate, state of the art theatre for local and beamed out via the Net and television broadcasts. You are going to be very pleased. Things are going to change in that area of town. People in the Carnegie centre are aware of these changes coming about gradually and can inform you about the theatre plans that will change the area or at least go along with the changes that are going to happen. RIght now though that part of town is a horrible depressing place as you described.
Try to take the tour it is really informative.

Just for clarification, there were two Pantages Theater in Vancouver at one time. The first was built in 1907 and opened to the public on January 6, 1908. This is not the structured designed by Architect B. Marcus Priteca. The original, at 152 East Hastings operated as the Pantages from 1907 to about 1930. It later became the State (which also had live burlesque performances),Avon, City Lights and Sun Sing Theater showing Chinese movies.

Sadly, this project may now be dead…

Regrettably there is no good news to report on the Pantages Theatre. Last July (2008) the previous City Council turned down the current owner’s final proposal to restore the Pantages Theatre. In September 2008, instead of purchasing the Theatre, Vancouver City Council agreed to conduct a feasibility study, which to date has not been started. The current Council has had no discussion with the owner and has shown no interest in reversing the previous council’s decision.

The sale of the Pantages is progressing and it is our understanding that the interested purchaser does not intend to retain the building. In the meantime the Theatre’s condition has deteriorated so rapidly it is now off limits to visitors. It appears that Vancouver will lose a 101-year old theatre, unique in all of western Canada.

What a sad commentation if heritage value and history does not mean a thing. We’ve already lost the old Imperial Theatre. This Pantages Theatre is one of the earliest built and is also the oldest remaining structure to still stand. I still recall a time when the Carnegie Library was going to be razed as well before being saved.

This website was originally created to save the Pantages and contains some additional historical information; it is uncertain how long it remain accessible since the effort unfortunately failed.

Status for the Pantages should read Demolished, as it shows in the current Google street view that there is currently new construction up at the old Pantages site. The theatre was demolished in 2011, according to CinemaTour – [link]