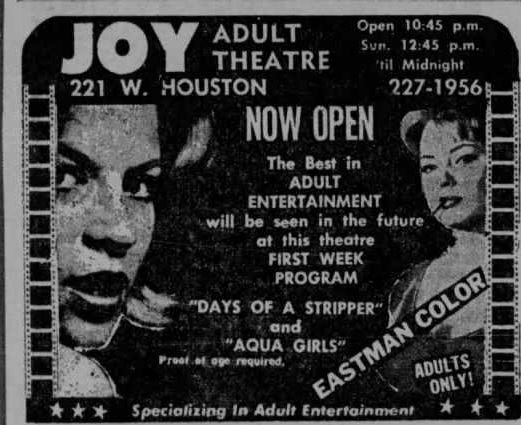 The Joy Theatre was opened in 1940. It was designed by architect J.M. Marriott of San Antonio. It was still open as a movie theatre in 1955 but had closed by 1957. It went over to presenting Mexican vaudeville (and possibly movies). It became an adult theater on January 17, 1969.

There are quite a few references to the Joy Theatre at San Antonio in various issues of The Billboard from the early 1940s, mostly concerning vaudeville or burlesque acts, but at least one mentioning a stock company. The Joy apparently featured live entertainment as well as movies in its early years.

There was also live entertainment in later years. The Joy might have closed in 1957, but might have reopened fairly soon after that, probably as a Spanish language house. Latina Performance: Traversing the Stage, by Alicia Arrizón, in a chapter about Mexican American comedienne Beatriz Escalona, who went by the stage name La Chata, says that Escalona performed at the Joy Theatre in 1976 when the house was presenting Mexican vaudeville on weekends.

I can imagine the Joy thriving for many years with Mexican movies and vaudeville, as did the Million Dollar Theatre in Los Angeles. Over on our National Theatre page, CT member kingfish left this comment which mentions vaudeville at the Joy Theatre, though no year is mentioned.

“Opening in 1940, it had varied between live shows, Burlesque, and Adult movies (and a few mainstream shows, too) while sometimes hosting Spanish shows as well. During it’s Adult Days, it played a number of films that are connected to fans of Something Weird Video.”

I see that the ads for the Joy Adult Theatre give its address as 221 W. Houston Street, while we list the Joy at 421 W. Houston. Unless there were two different houses called the Joy we must have the wrong address.