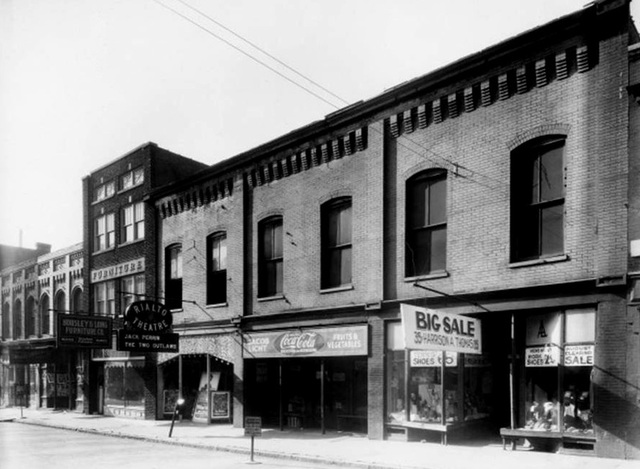 This undated photo shows the west side of Market Square just south of Wall Avenue, probably in the late 1920s. The Rialto was in the fourth storefront from the corner. The space is currently occupied by a retail clothing shop called Bluetique. The address is 31 Market Square.

Here is a a frontal view of the Rialto. The posters advertise The Hollywood Review, the 1929 MGM release that showcased a number of the studio’s biggest stars along with some of the era’s popular vaudevillians in a series of musical numbers and comic sketches. It premiered at Grauman’s Chinese Theatre on June 10, 1929, so it probably reached Knoxville later that year, but the smallish Rialto was likely a sub-run theater so the photo might date from 1930.

The facade of the building that housed the Rialto is remarkably unchanged today.

1928 photo added of the Rialto Theatre.

A 1927 photo of the Rialto at its original location on Gay Street is on the photo page.

I have failed to bring this up before, but technically the theater on this page should be listed as the Crystal with previous name Rialto.

Ha, I’ll say. When I first added this theatre, I could find no other Rialto listed in Knoxville on Cinema Treasures. Since my 1928 photo and the photo in the Knoxville historical link in the first comment are the same building, I’d say both are the Market Place location. The marquee was obviously moved, but the film “Two Outlaws” in my pic was released 11/18/28 according to IMDB. So the one on Gay street moved to Market Place a year after it opened.

I just noticed it’s the same film on the marquee in both pics. Mine just has people and cars.

I just added the below comment to the photo of the original Rialto on Gay Street.

“The Great Mail Robbery” on the marquee was indeed released 07/19/27. The marquee then went with to the new location on Market Place by 1928, when “Two Outlaws” appeared there on it’s 11/18/28 release. Documented in the other photos.