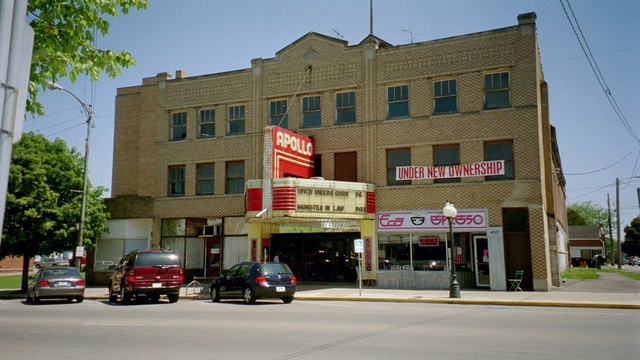 Built in 1882 as the Apollo Opera House, this 720 seat venue turned to movies in the early years of the 20th century as the Apollo Theater.

During the 1920’s, world-famous organist and Princeton-native Virgil Fox, whose parents owned the Apollo Theatre at the time, accompanied the silents playing there as a teenager. In the 1940’s and 1950’s, Bailey Enterprises operated the theater.

When the Apollo Theatre was run by GKC Theatres in the 1980’s, it was twinned. Today, it is part of the Johnson Theaters chain, and shows first-run features.

The Apollo, as the Apollo Hall, is listed in the 1897-98 edition of the Julius Cahn Official Theatrical Guide under Princeton, Illinois. The seating capacity was given as 1,000. C.G. Cushing was Mgr. The proscenium opening was 25 feet wide x 18 feet high, and the stage was 30 feet deep. Ticket prices ranged from 25 cents to 50 cents. The theatre was on the ground floor and had gas illumination. Local hotels were the American House and the Powell House, and there were 3 weekly local newspapers, the Republican, the Tribune and the Record. Local railroad was the CB&Q. The population was 5,000.

^ and it has digital projection AND 7.1 – nice. Had stopped in town to go to my favourite cafe ‘Four and Twenty’ last week on my way to and from Iowa. (sadly did not have the time to check out a film at the theater).