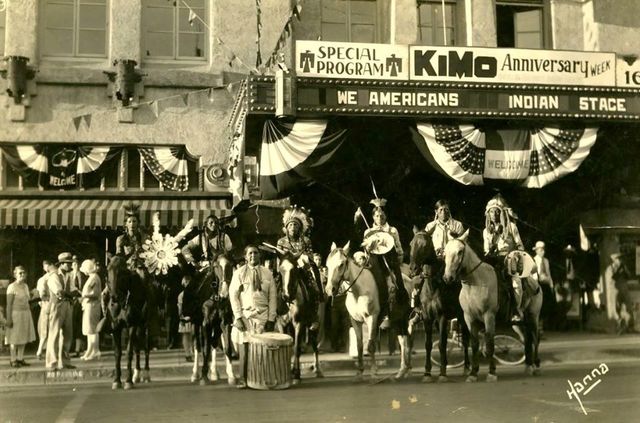 “Here is a very unusual Old Route 66 photo of the "KIMO THEATER, ALBUQUERQUE, NEW MEXICO” with a number of a number of Native American Indians posed in front. The billboard says that it is a “Special Program, KiMo Anniversary Week, We Americans - Indian Stage” program. We would guess this to be about 1938 based on the clothing and hats the other people were wearing in the crowd and the marque. This is the original marque which was upgraded in 1940. Those awnings went away about 1938. Photo courtesy of Joe Sonderman. Historically, the KiMo was built in 1927 to show both motion pictures and stage productions, the KiMo Theater has an important place among the elaborate palatial dream-theaters of the 1920s. KiMo, in the language of the nearby Isleta Pueblo, means “king of its kind,” and the name is certainly well deserved. The KiMo was the first theater constructed in the Pueblo Deco style, a fusion of ancient American Indian and Art Deco design. This short-lived style was highly unique during a time when Chinese and Egyptian designs were the predominant styles used for film palaces. Built for Italian immigrant Oreste Bachechi by the Boller Brothers firm at a cost of $150,000, the theater is a steel frame and brick building three-stories high, with retail shops flanking the entrance on both sides. Its exterior is finished with strongly textured light brown stucco embellished with ornamental details of glazed terra cotta tile and vividly-colored reliefs. The large marquee and vestibule entrance reflect remodeling from the 1950s. The interior is designed to look like the inside of a ceremonial kiva, with log-like ceiling beams painted with dance and hunting scenes. The interior also includes air vents disguised as Navajo rugs, chandeliers shaped like war drums and American Indian funeral canoes, wrought iron birds that descend the staircases, and rows of garlanded buffalo skulls with glowing amber eyes. Painted in oil by Carl Von Hassler, seven murals depict the Seven Cities of Cibola. Each image depicted throughout the theater was carefully chosen for its historical significance, including rain clouds, birds and swastikas. The swastika is an original Navajo symbol for life, freedom, and happiness that was applied to the KiMo long before Nazi Germany adopted the symbol. In 1961, a fire destroyed the stage and other areas of the theater. With the combined forces of suburban growth and competition, the theater fell into decline and closed in 1968. It was nearly demolished in the 1970s before the citizens of Albuquerque voted to purchase and restore it. The theater was listed in the National Register of Historic Places in 1977 and partly rehabilitated in 1981. The restoration was completed in the 1990s as part of downtown Albuquerque’s revitalization efforts–just in time for Route 66’s 75th-anniversary celebration in 2001."