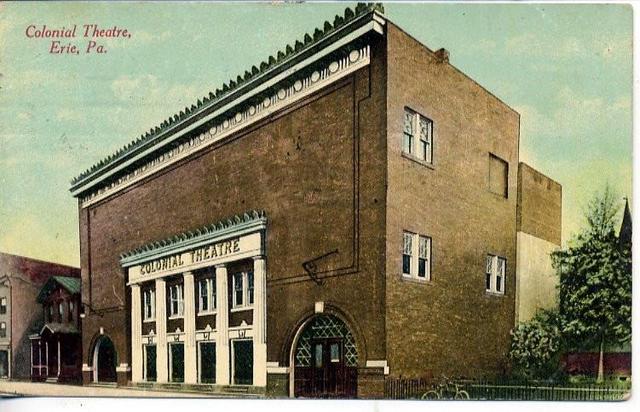 This theatre was one of several on Peach Street in Erie. It was a conversion of a church building and opened in 1909. The Colonial Theatre was operated by Shea Theatre from 1953, and was closed June 1, 1958, and was undoubtedly a casualty of television.

MY Dad was a manager at the Colonial and went to WSEE TV when the theater closed. My mom was an usherette and that is how they met. I have a fer pictures of the Colonial if you are interested.
dwhinnie

Dear dwhinnie,
My father gave me a beautiful, if somewhat worn, tapestry he said used to hang in the lobby of the Colonial. It is almost as large as a standard room door. If you have any pictures depicting tapestries of women I would be interested in seeing them. Any pictures that may contain all or part of the tapestries would be great in helping me date the item.

This item states that the Colonial was converted from a church in 1909:
http://tinyurl.com/djfypj

It’s not a church now. It was converted to a theater from a church building in 1909.

Right. I didn’t ask for it to be changed. I pointed out that the theater building was originally a church and was converted to a theater.

ERIE, PA.-The Colonial Theatre, one of four major theatres here, built early in the century for a vaudeville house, closed its doors for the last time Sunday night, June 1. A leading motion picture theatre for many years, the Colonial had been operated by Shea’s circuit since September 1953. Closing of the theater was attributed to a loss of its lease and the decline of business “which doesn’t justify continued operation in the summer.”

Before Shea’s, the theatre was managed for many years by Vic Weschler, owner of the property. The Shea organization continues operation of its A-house here, Shea’s Theatre. Weschler is working out conversion plans for the building.

Ken MC or Anyone…
My father gave me a beautiful, if somewhat worn, tapestry he said used to hang in the lobby of the Colonial. It is almost as large as a standard room door. If you have any pictures depicting tapestries of women I would be interested in seeing them. Any pictures that may contain all or part of the tapestries would be great in helping me date the item.

When I first went to this theater in the late 1940’s it was the only downtown theater without a snack bar. This was corrected in the early 1950’s. This theater showed double features tons of Martin & Lewis, Abbott & Costello, news and cartunes. A real family place and I miss it so.

A Twentieth Century History of Erie County, Pennsylvania, by John Miller, didn’t cover much of the twentieth century, as it was published in 1909, but it was able to note the origin of the Colonial Theatre, which opened that year:

“Early in 1909 A. P. Weschler, a prominent real estate dealer, bought of the Church of Christ the building that for years had been known as the Tabernacle. Although it was built for church purposes, in appearance, both inside and out, it was as unlike the traditional church as possible. The floor was of the amphitheatre form or style; the rostrum or platform was in reality a stage, and it was provided with a gallery. There was therefore but little reconstruction necessary, and before the spring was over the Colonial Theatre had been dedicated as an addition to Erie’s playhouses, to be devoted to the vaudeville line.”

Although it was mentioned in The Moving Picture World at least as early as July 31, 1915, the Colonial sometimes offered two-a-day vaudeville shows for many years. Variety of September 20, 1918, reported:

“The Colonial, Erie, Pa., booked by the United Booking Offices, is the only house now there playing regular vaudeville. The Majestic, last season booked through the Loew Circuit, has taken up another policy.”

There were listings in Variety for vaudeville shows at the Colonial at least as late as 1923.