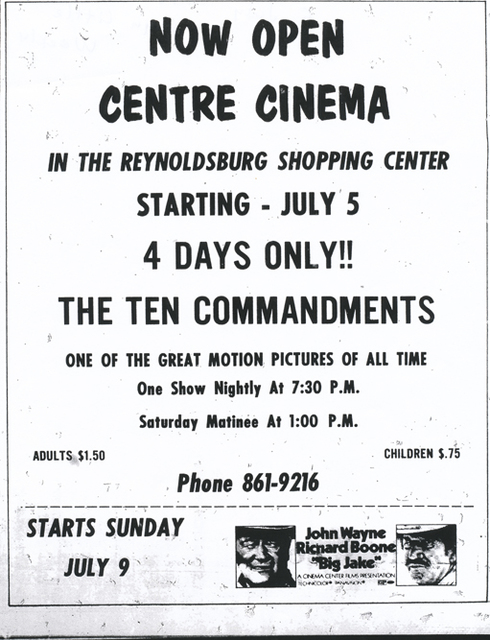 “NOW OPEN CENTRE CINEMA IN THE REYNOLDSBURG SHOPPING CENTER” The previous information appeared in on page 3 of the Wednesday July 5, 1972 Reynoldsburg Little Weekly newspaper. The first film “The Ten Commandments” was shown nightly at 7:30pm with a Saturday matinee at 1:00pm from July 5 to Sunday July 9. Adult tickets were $1.50 and children 75 cents. On July 9 “Big Jake” with John Wayne started.

Here are some of the films released during that time: “The Cowboys”, “Bedknobs and Broomsticks”, Disney’s “The Biscuit Eater” had never heard of this and the advertisement said…The greatest Disney of all time. “Conquest Of The Planet Of The Apes”, “Patton”, “The Hospital”, “Frogs”, “Kansas City Bomber”, “Diamonds Are Forever”, “Cold Turkey”, “King Kong vs. Godzilla”, “The Haunted Palace”, “Dirty Harry” and perhaps “The Reluctant Astronaut”.

The Cinema advertisements appeared again in the Reynoldsburg papers in 1973, but this time with a new name. On March 14, 1973 an advertisement for Reynoldsburg Cinema appeared announcing the showing of “My Little Chickadee” with Mae West and W.C. Fields as well as “Godzilla vs. The Smog Monster”. More movies which appeared at the Reynoldsburg Cinema: “Dumbo” and “The Legend of Lobo”, “The Train Robbers”, “The Snow Queen”, “Cabaret”, “Hello Dolly”, “Gone With The Wind” and “Black Beauty”, “Avanti!” and “Snoopy Come Home!”, “1776”, “Camelot” and the film I remember seeing there which started this search: “2001 a Space Odyssey”. 2001 showed from Wednesday March 28, 1973 thru Tuesday April 3, 1973. 2001 was shown in SUPER PANAVISION and METROCOLOR. The children’s matinee for Saturday and Sunday March 31 was “Around the World Under the Sea”.

“Local cinema opens” is the headline for an article in the January 30, 1974 Reynoldsburg Reporter. The Reynoldsburg Cinema was open again following a change in management. Opening night was Friday, January 25. “Tim Call and Gary Hughes, Incorporated as the C & H Amusement Company, have taken over operations of the theater from former owner Richard Retterer.” In 1974 some of the films shown were: “Walking Tall”, “Jesus Christ Superstar”,“The Way We Were”, “WESTWORLD, 1969 "Pinocchio” musical. The new Reynoldsburg Cinema’s address was 7100 E. Main Street which is where the block where 1280 Aida Drive is located. The Reynoldsburg Cinema stopped advertisments in 1975. Currently a bank sits at 7100 E Main Street.

When I was a kid the Reynoldsburg Shopping Center had a Super Duper, Fotomat, Scott’s 5 & 10, Swan Cleaners, Don, Don’s Briarcliff Drive in was on the SW corner (now a Burger King). There was a very small branch of the Columbus Public Library in there as well. But the Cinema(s) were across the road in a small section of their own close to Super Duper which was the store farthest east of the main shopping center.

Reynoldsburg Shopping Center still exists today with Kroger in the main area and a few restaurants etc. in the side spot, but the cinema has been closed for some 30-40 years. Not demolished. The building is still there although re-purposed.