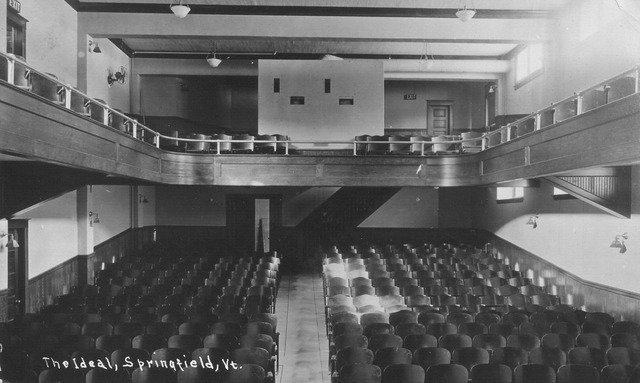 The Ideal Theatre was opened about 1914 as part of a group of old buildings called the Sparrow Block (owned by the Sparrow family). It had a stage and a shallow U-shaped balcony. Movies and vaudeville acts were presented. Later, the Ideal Theatre was an affiliate of the Latchis Circuit. It was damaged by fire and demolished in the early- or mid-1950’s.

The Theatre Historical Society archive has the MGM Theatre Report for the Ideal; it’s card # 594. Address is “Town Square”. There is an exterior photo taken in April 1941. The Condition is Fair. The report says it opened in 1928 (incorrect) and that it was showing MGM films. There were 540 seats, which is too low. A competing theater was the Avon (today, the Springfield Cinemas 3). The 1940 population of Springfield was 7,000.

The last movie I saw at the Ideal was Elvis Presley’s Jailhouse Rock in 1958.