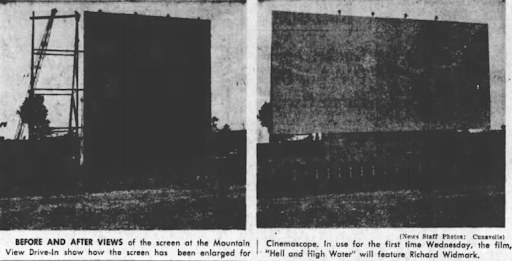 The Mount View Drive-In was opened July 31, 1952 with Adolphe Menjou in “The Sniper” & Bud Abbott & Lou Costello in “Who Done It?!”. It was operated by O. Bernadine and Daytz Theatre Enterprises of Boston, MA. It was closed in 1984 and was owned and operated by Merrill Jarvis.

It was subsequently demolished. Today, a McDonalds, Quality Inn and Motel 6 sit on the property. There is nothing left of the drive-in itself apart from the triangular shape that the three businesses make on the property.

Opened witn a cartoon(not named), a sport feature, and “Stop, you’re killing me!” And “Man behind the gun”.

The Opening Date Is Wrong, It Was Exactly The Theater’s First Full Season Opening, Or Second Season.

I Apologized As I Accidentally Posted An Another Mountain View Drive-In Page Nearby But Except It Was Listed As In Winooski, Sorry. They Will Fix It As Soon As Possible. I Thought I Found A Different Mountain View Until I Found The Right Page This Came From.

More commonly located in Winooski but not too far from Burlington, the Mountain View Drive-In was first constructed on June 14, 1952 off of Routes 2 and 7. The sale of the property was handled by Donald Daley. The 650-capacity Mountain View Drive-In then later opened its gates on July 31, 1952 with Adolphe Menjou in the Columbia film “The Sniper” along with Abbott and Costello in “Who Done It?!” and an unknown cartoon. Both Projection Booth and Concession Stands were both built by brothers Frank and 37-year-old Orero Bernardini. McAuliffe’s of Cor. Church and College Streets in Winooski installed the supplies and equipment. N. Duchaine Incorporation of 237½ Main Street in Downtown Burlington made the original steel 60ft screen which lasted for almost 2 years, and the Rocheleau Decorating Company of 39 Maple Street in Winooski did the decorating for the original screen. When the theater opened, Peter Salvucci of an unknown town in Massachusetts was the main contractor. The theater also equipped itself with horns. The horns were used after the 15-minute intermission (not 10), in which the screen during the 15-minute reel displayed an image of a clock (which was considered lost through time possibly), until the end where the horns that were established begin to blow warning signals to people that the show is about to start.

On May 4, 1953, the theater was announced to install playground equipment for the children. The playground equipment considers a colorful picket fence of red, green, yellow and white lines, and juvenile joys of chutes, swings, teeters, pony rides, and a merry-go-round. This theater also has a boon to parents of restless children, prior to either Disney, Looney Tunes, Merrie Melodies, Walter Lantz, UPA, TerryToons, or other cartoons that the theater chooses from prior to other special programs and the main features. Alongside the playground, this theater is also equipped with a high-fidelity magnetic sound system. Orero Bernardini thoughted about the sound system, as he recommended that he could hear it from 3 to 4 different directions.

The original screen of the Mountain View Drive-In only lasted until June of 1954, when the announcement was heard by Orero Bernardini. The original 60ft steel tower that was built by the N. Duchaine Incorporation and decorated by the Rocheleau Decorating Company was replaced by CinemaScope, a 101x48 steeled screen completed by the Rocheleau Construction Company, owned by Louis Rocheleau himself. During the week of July 18, 1954, the screen was temporarily under construction and was completed and installed a week afterwards on July 25. Photos of the screen construction “during and after'‘ were then posted on the Burlington Free Press. One picture demonstrates the former 60ft original screen lying sideways on the ground, and the other picture demonstrates the CinemaScope screen standing making it finalized. The CinemaScope screen plans were involved 3 weeks prior to the building. Louis and his construction team completed the Flex-Board facing, painting, and cement foundations while the Vermont Structural Steel Corporation undertook the steel portion which does include the framework and underlying of the screen. Not just CinemaScope but a new sound system was required and major updates to the theater. He also adopted a theory that people wanted to find pictures when they stilled more commonly explaining about, more commonly for the film, “Living It Up” starring Dean Martin and Jerry Lewis had its preview at the Mountain View on the same day the film premiered in Atlantic City, New Jersey. More Kitchen equipment was added along with more snacks to fit people’s appetite. The bathrooms were painted bright red nearby, and there is an efficient traffic control on cars heading out of the theater.

Nearby, April 14, 1960 marked a meeting near the Mountain View Drive-In where a bridge was planned over the Winooski River. But fast-forward more than 2 years later and a bigger project came out-of-the-blue for Chittenden County on March 14, 1963. A total of 4 contracts leading from the Mountain View Drive-In Theatre through Malletts Bay to an interchange on US Route 2, Island Road in Chimney Corners were planned to launch the following summer. As of that month, the grand total of 6,282 miles was estimated at a cost of $3,676,308.68. Almost 2 months later, the Mountain View Drive-In closed for 2 days as Orero’s brother Frank Bernardini announced on May 9 and 10, 1963 possibly due to the construction nearby. The entire highway was announced to be in completion a week prior to the assassination to then-President John F. Kennedy.

Orero Bernardini retired in 1970 after almost 18 years working at the Mountain View Drive-In. He passed away 8 years later in April 1978 at the age of 63. Apparently, the Mountain View Drive-In announced on April 13, 1970 that the theater was given to the SBC Management Corporation of Boston, Mass. SBC at the time continued to work on construction at the nearby Cinema I & II nearby in South Burlington which launched the following May 22. After becoming ownership with SBC, the early 1970’s are the most harsh years for the Mountain View Drive-In. The reason why is because of many “Help Wanted” ads scrambling all over Burlington’s Free Press pages. The Mountain View committed a possible robbery on March 2, 1972 after the Winooski Police Department reported on an empty cash register.

The Mountain View Drive-In’s final season is 1984, where it closed its gates for the final time after the end of the season. It sat abandoned for more than a year until one-story buildings and a shopping plaza were announced to place on its site on July 10, 1986, announced by the Pizzagalli Investment Corporation, and was forced to demolish the Mountain View Drive-In.

Thanks, And Thanks To The Burlington Free Press For All Those Stories And Informations.