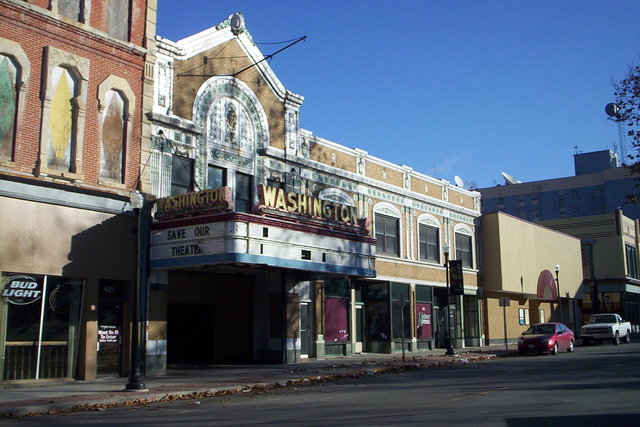 Opened June 19, 1924 as the Washington Square Theatre. It was named for the park of the same name which it faces in downtown Quincy. The Washington Square Theatre was one of many vaudeville and movie houses on Hampshire Street, which was Quincy’s own “Great White Way”. Most of the theatres, such as the Adams Theatre, the Orpheum Theatre, the Bijou Theatre, the Quincy Theatre and the Savoy Theatre have either long ago been closed, or more commonly, torn down.

The Italian Renaissance-style Washington Square Theatre, which seated just under 1,500, was designed by Chicago architect E.P. Rupert. It featured a Barton 3 manual, 7 rank organ, and a depiction of George Washington on the fire curtain. Its ornate façade was covered in terra-cotta, including polychrome masks of comedy and tragedy.

In 1926, the Chicago-based chain of Balaban & Katz assumed control of the Washington Square Theatre, and not only remodeled its décor, but added a new stage, an air-conditioning system, rebuilt the dressing rooms and, a couple years later, wired the Washington Theatre for sound, becoming Quincy’s first “talking pictures” house, with the film “The Lights of New York”. Vaudeville and stage shows were featured as well through the 1930’s under Balaban & Katz.

In 1971, the Washington Theatre was sold to the Kerasotes Theatres chain, which continued to operate the theatre as a first-run house for another eleven years. After closing the theatre, Kerasotes donated the Washington Theatre to the City of Quincy. From the late-1980’s until 2000, another organization owned the building and while it made repairs to the façade and storefronts, the auditorium was used for storage space.

In 2000, the City of Quincy once more acquired the Washington Theater, and since then, the Friends of the Washington Theater have been raising money (its goal is $1.1 million for the initial phase of restoration) to return the landmarked old movie palace (which has fallen into a state of disrepair over the years) to its former splendor. In 2018 it was reopened as a special events venue.

Wow the marquee sure looks a lot better now.

Here is a link to photographer Edmund J. Kowalski’s photos of the Washington Theatre taken June 25, 2005, before the house was restored.

The information above on the organ in the Washington Theatre is incorrect! The Washington had a 3/7 Barton organ (1924). The Orpheum Theatre in Quincy had the Wurlitzer, a style B (1924).

This house appears to have opened as the Washington Square Theatre. Click the thumbnail at left for an interior photo on this page with a photo of the front. The May 3, 1924, issue of The Moving Picture World had this item:

“The new Washington Square Theatre, Quincy, Ill., will open on June 15, according to present plans. ‘If Winter Comes’ will be the opening feature.”

The renovations of the Washington are underway, and the house is “safe” to open up for special fundraising events (even though the venue is far from finished.

You can read about their progress by checking out their website, http://quincywashingtontheater.org/

The Do You Remember site of the University of Illinois cites June 16, 1914 as the opening date as a vaudeville house with the first film being shown as The Temple of Venus on January 16, 1926 and the first talkie, The Lion and the Mouse on November 4, 1928.

Uploaded the ad for the opening of the talkie The Lion and the Mouse from the Quincy Public Library collection.

The Washington Theater is now open for special events. I was there Aug. 9, 2018. See some of the photos in the PHOTOS section that I posted. Just across the Park (Washington Park) the Quincy Museum has information on the theater on display. This was the 1st theater to show a “talkie” in Quincy, Illinois. BTW, the famous 1858 Lincoln – Douglas sixth debate took place in Washington Park.

The Washington Theater Redevelopment Group is searching for any old photos and/or informatin this group might have regarding the theater’s years of operation, 1924-1982. If you have any materials that you would be willing to share or know of someone who may have any of these type of materials, please contact us at – we will be happy to post some additional photos, both archival and redevelopment here as well.