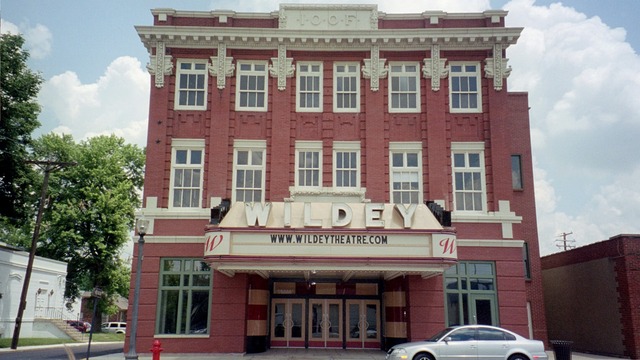 Designed by architect George H. Kennerly, this opened on April 12, 1909 as an opera house and meeting hall for the International Order of Oddfellows (on the second floor). The Wildey Theatre was named for Thomas Wildey, who brought the group from England to the US in the early-19th century. It is located in downtown Edwardsville, on Main Street. In addition to opera and Oddfellows gatherings, the Wildey Theatre featured concerts, legitimate theatre, and, later, movies (which the theatre would eventually switch over to completely).

In 1937, the quaint Victorian-style original decor was considered passe, and the theater was remodeled in an Art Deco style, including a new marquee. During its final years as a movie theatre, under the Plitt Theatres chain, the Wildey Theatre was a bargain house, with 99 cent tickets. Its last film was “The Big Chill” on March 8, 1984.

After sitting vacant for many years, the Wildey Theatre renovations began in 2009, to the plans of architectural firm Trivers Associates in association with local firm Henderson Architects. It will be used as a multipurpose venue, including performing arts, theatre and classic movies. The State of Illinois allocated about $300,000 towards the Wildey’s renaissance.

The Wildey Theatre was reopened on Aprile 12, 2011, the 102nd anniversary of its grand opening.

The theater website has an interesting video clip from last month that shows the interior renovation.
http://www.wildeytheatre.com/

The original architect of the Wildey Theatre was George H. Kennerly. Four years after the Wildey was built, Kennerly formed a partnership with architect Oliver W. Stiegemeyer. The firm of Kennerly & Stiegemeyer operated from 1913 to 1931 and designed several theaters.

The recent renovation of the Wildey was handled by the St. Louis architectural firm Trivers Associates, in association with the local firm of Henderson Associates Architects.

The grand reopening of the theatre will be April 12.

At the link below is article from ST LOUIS POST DISPATCH about re-opening og the Wildey:

Another article about the reopening of the Wildey from the BELLEVILLE NEWS DEMOCRAT:

Two more newspaper articles about the Wildey from the BELLEVILLE NEWS DEMOCRAT:

One more article; this one with photos of the restored Wildey:

The Wildey was one of the host theaters for this year’s St. Louis International Film Festival, and on November 9th,I was able to attend both a film showing and concert at the Wildey. My first time to go inside the Wildy, and it is truly a beautiful theater!

I took a few pictures of the Wildey while I was in the area on a trip through Southern Illinois last year. Here’s one of them; there are more on my Flickr page!