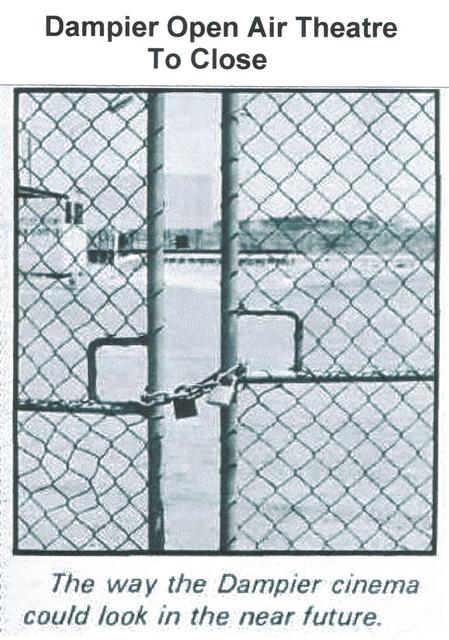 The Dampier (open-air) cinema was opened in its present form in April 1969. A simple cyclone wire mesh fence surrounded the area, where patrons sat on moulded plastic chairs, arranged in permanent rows. Initially there were screenings on four nights a week. This was reduced to two, and then finally limited to Saturday night.

In recent years the cinema needed to take $280 to be profitable. To hire a movie for one night is $100. Another $30 is needed for distributer to collect the movie and send it to the DCA. It is $10 - $20 for freight charges and a final $110 in order to man the kiosk, maintain order, projection fees and electricity.

The cinema came under the jurisdiction of the DCA (Dampier Community Association). For the last three years of it’s life the cinema was leased by Westralian Drive-Ins, which paid the viewing charges, however it was found to be unprofitable. The Open Air Pictures finally closed in 1983, later a cyclone destroyed the screen.