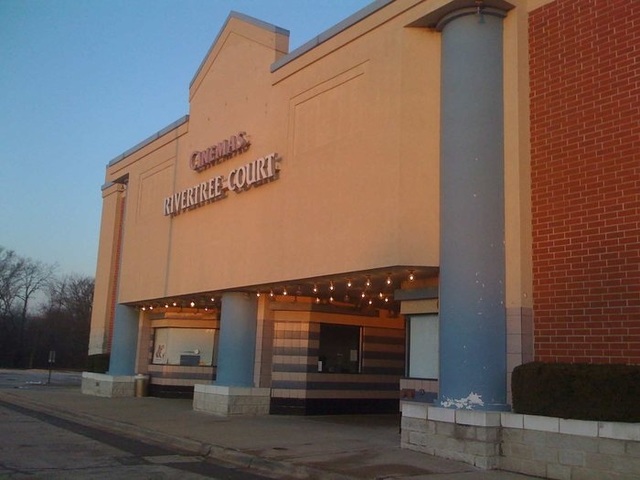 The Rivertree Court opened October 7, 1988 by Cineplex Odeon. It was closed in 2000 by Loews-Cineplex. Reopened in December 2001 by Kerasotes Theaters (which also runs the Showplace 8 Theaters across the street). This theater was best known for showing independent, art, and foreign films.

Actualy this movie theater open in november of 1988.

The address is 701 N. milwaukee

Thanks aek316.I know the feeling.

Anyone know what the status of this theater building is? I remember reading from some source that Gordman’s was considering opening a store on this site(per a suburban newspaper website owned by either the Trib or Sun-Times), but I have no idea if Rivertree Court is still standing, or what.

I was worried with the AMC-Kerasotes merger that older theaters like this one were at risk of closing and/or sold, and sadly my fear turned out to be right here. Too bad too, since under Kerasotes, this was a really cheap place to see movies.

Unfortunately, the Rivertree Court is no more. The building is still standing, but Gordman’s did buy the space and completely gutted it. I drove by the other day and the cinema sign was even replaced by a Gordman’s sign. I haven’t seen the building up close in awhile, but you probably wouldn’t recognize it from the outside. I am extremely bummed about RT’s closing too. I only was in there once a few weeks before it closed and it was unique in the fact that it was a Cineplex Odeon timepiece. The minute I heard AMC bought it I knew the end was near. After all, they closed it once before and AMC doesn’t give a damn about their older theaters (see Norridge, Webster Place or any of their other older theaters). Kerasotes was a good company that cared about its theaters and more importantly, its customers. How did AMC manage to monopolize Chicago area theaters with their crappy upkeep?!

Thanks for your comment, aek. I haven’t been out there since late 2008, hence my question about the status of this building. And totally agree that Kerasotes at least did at least try to maintain their theaters, unlike AMC.

It stinks to think about the Norridge(since I have a friend who works there), and she reported to me that the theater was closed for a short while this past summer(forget how long it was for), when the roof started to leak into some parts of that building. Proof that AMC doesn’t care much about their older theaters. Not to forget they shuttered both this one, and Pipers Alley. (the latter I feel is definitely possible to reopen as a theater again, but who knows what’ll happen with that one in the future)

With Gordmans declaring bankruptcy, this space will soon be vacant again. Barely made it 5 years, Makes me even sadder Rivertree Court closed.