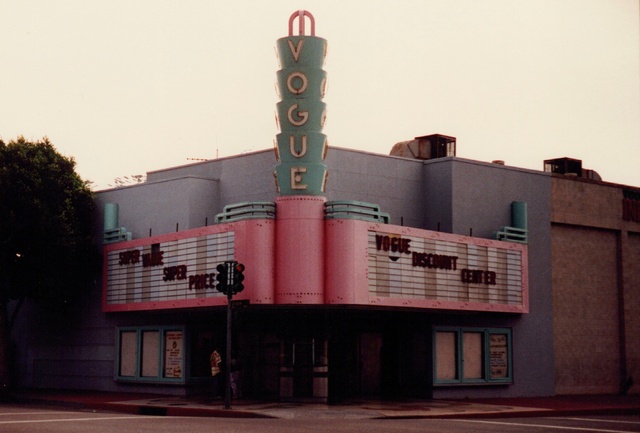 The Vogue Theater was a highly popular Oxnard downtown theater from 1940’s through the 1960’s.

A chain out of Los Angeles, Oxnard Theaters Co., operated the Vogue in the early sixties. Other Oxnard theaters under this chain’s command at the time were the Strand, Boulevard and Oxnard.

Here is an October 1958 ad from the Oxnard Press-Courier:
http://tinyurl.com/l46k2d

I was in Oxnard over the past summer. I happened to be walking near by the Vogue Theater when I noticed the building was obviously a former theater. I had to make a detour to explore. The signage on the tower in front that still reads “Vogue” is what especially caught my attention. The sign is about all that is left of any interest. The auditorium and lobby have been gutted and now house a swap meet.

Was this the Strand? its listings disappeared shortly the Vogue opened
you can see the grand opening page from February 15th, 1950 at View link

I was surprised to find some nice 1940’s style details in what was probably the candy counter in the former lobby. See photos.

No, this wasn’t the Strand. That was a separate theatre. I have ads for the Strand Theatre. I also have ads for the Lyric Theatre. Info for the Vogue is as follows: The Vogue Theatre was built by Edmund Lehman in 1949-1950 and designed by architect William Balch. The Vogue was built in response to a surge in the population following WW2. The Vogue is the only theatre that remains that was designed by Mr. Balch.

Irene: Here is the page that explains how to make links on Cinema Treasures.