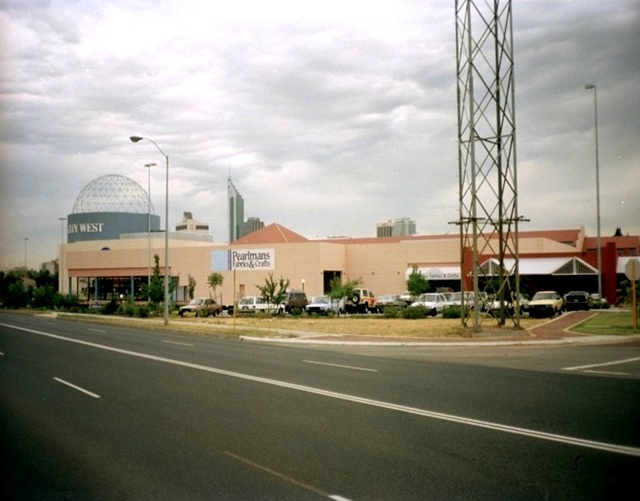 Located on Railway Parade at the northwest corner of Sutherland Street. Omni Cinema opened in the City West Homemaker on 31st October 1987 with 200 seats. Omni Cinema closed on 3rd September 2000.

It was taken over by Scitech in 2004 and opened as Horizon-The Planetarium. The dome on the outside of the building is still there, and may still light up at night. In late-2013 the building was gutted and renovated to seat 178, re-opening as Sciteck Planetarium Cinema.

Hi, I actually manage this place and would love for some of the details to be upgraded for the Planetarium.

It was the OmniMax until 2000 when it was closed due to a lack of content, ticket sales and there was a 15/70 IMAX down the road and so it was decided to close the OMNI instead. I have pictures of the OMNI which I can upload at some point. IMAX left all the projection equipment here, plus the Spitz star lens and all the audio equipment too. Scitech Discovery Centre bought it in 2004 and re-opened it as ‘Horizon – The Planetarium’ showing full dome movies and ‘Horizon Live’ A presenter led tour of the known Universe and everything in between. Up until 2013 they used 6 x Barco 303 RGB projectors which proved very unreliable. In late 2013 a LotteryWest grant of AU$1.4m was awarded and the Planetarium was gutted out (which I was a part of) 2 x Sony T420 projectors and 1 Panasonic Laser LED DLP run the shows in 4K resolution over an 18m dome. we also have an 8bit 16.7M colour Cove system that is fully programmable for the dome lighting. It is still the largest in the Southern Hemisphere and attracts over 130,000 a year through its doors. It now holds 178 seats and space for 4 wheelchairs at the front.

Please feel free to delete this comment and copy/paste the details into the main description of the venue. If you need any more info, just give me a shout on my log-in email. Cheers! [cinema]Simon