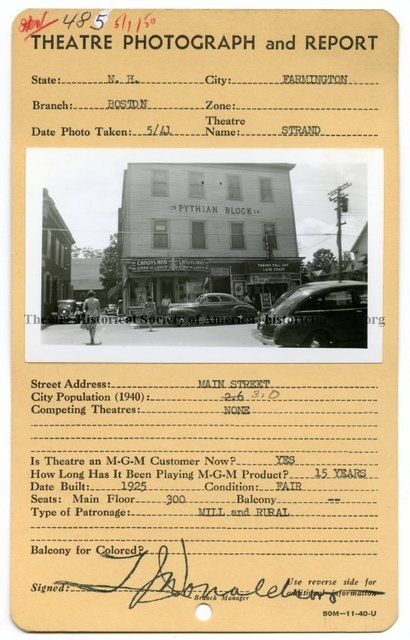 The Strand Theatre was created inside an existing 3-story building, the Pythian Block, which dated from 1914. It was opened by Walter Young in the 1920’s, who was a minor child at the time, so he had to be represented by his father. But young Walter had no trouble lining up a film exchange to book his theatre. The theatre entrance was at the right side of the facade.

The Theatre Historical Society archive has the MGM Theatre Report for the Strand – it’s Card # 485. Address is “Main Street”. There is an exterior photo dated May 1941. Condition is Fair. The report says that the Strand opened about 1925, shows MGM films and had 300 seats. The 1940 population was 3,000.

I suspect that Walter Young was one of those energetic boys who develop an interest in some subject and become almost as knowledgeable about it as an adult. He decided he was going to convert Pythian Hall into a movie theater and that’s all there was to it!

I have seen “Dreamland” as an alternate name for this theater, but have found nothing more to that effect. Dreamland was a popular name for small cinemas in the early days of “Motography” (motion photography) shows.