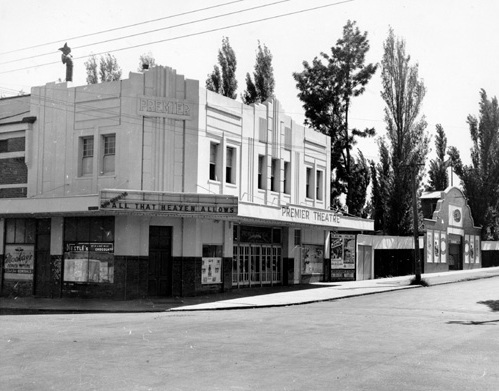 Located on Sterling Street at the corner of Bulwer Street. The Premier Theatre opened in 1924 with 1,450 seats and was designed by architect Samuel Rosenthal. The adjacent Summer Gardens opened in 1937 with 1,800 seats and was designed by Oldham Boad Ednie Brown. The Premier Theatre closed in(late-1950’s or early/mid-1960’s) and converted into a ice skating rink. The Summer Gardens continued with part of the seated area covered over to enable screening all year round. The Summer Gardens closed in 1975 when the screen blew down a storm.

The ice skating rink continued until(1982?) when a larger rink opened in Mirrabooka, and the venue was turned into a disco. The theatre was restored in 1985. The disco was closed on 27th April 1987 and demolished soon after. The site is now an office block(National Australia Bank?). The new building is called Premier.

There is a picture of the Premier Gardens(and Theatre?) in the book “Lost Perth volume 2”(page 74).

The Premier Theatre was built by the East Perth Football Club. Films had previously been screened outdoors at Perth Oval and the club decided to build an indoor theatre. WR (Bill) Haynes, the club’s patron, lent them the money for it but in 1927 he decided to take it over himself. Cyril Norton (secretary of the EPFC) became the manager.

The club colours of blue and black.

The tiles along the front of the building were in the club colours of blue and black. The interior had a pressed tin ceiling. The theatre seated 1,000 patrons downstairs and 440 upstairs (some reports 450) – In 1938 it underwent a major renovation both externally and internally to the Art Deco style, and new projectors and a sound system were installed. “When it was a top film we used to switch with the new Oxford Theatre. They’d show the first half and we’d show it the second half. A chap on a motor bike used to run between the two theatres with the spools.”

The deck chairs were expensive

The Premier Theatre Gardens were built in Stirling Street in the mid-1930s. “The deck chairs were expensive and the garden seats were the cheap ones. When it rained they used to have to carry half of the projection equipment across from the gardens to the theatre and start 20 minutes later. Everyone from the garden’s cheap seats used to head straight for the good seats upstairs.” posted online by (Graham Norton) – Contributed by Greg Lynch –

Demolished in 1987. There is now a plaque on the footpath on the street corner where the Premier theatre and Gardens used to be(installed in september 2019?).