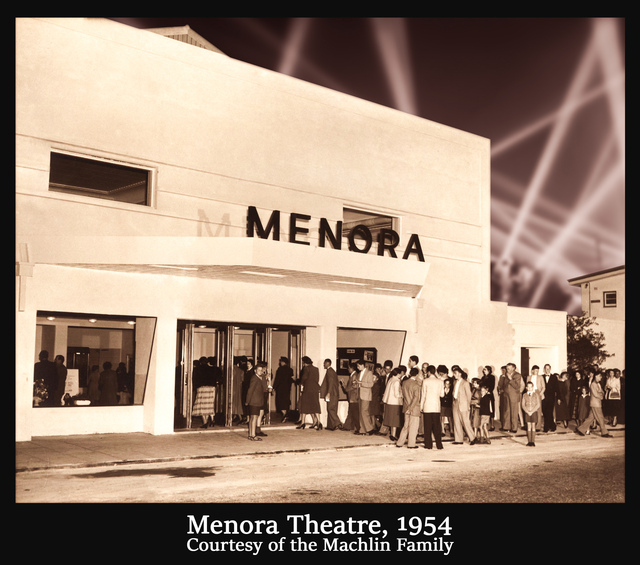 The Menora Picture Gardens were built by Abraham Machlin of Mt. Lawley, WA with a seating capacity of 1,100, opening with council approval on 18th January 1947. A packed house enjoyed the films “Laura” starring Gene Tierney & “Four Jills in a Jeep” starring Kay Francis. The theatre was named after the ‘Menorah’, a candelabra used in the religious rituals of Judaism. Building materials abandoned by the American military were used in the construction, however in the first instance creating audience sight-lines (a clear view of the stage) were a major problem, and it took several days of utilizing an earth scoop borrowed from the Shire of Belmont to create an upward rake in the land. The scoop was dragged by a powerful animal known as a draft horse, while a weighted plank down by the horse was used to level the ground. Eventually every seat had a clear view of the screen. Abraham was proud of his Picture Gardens, a labour of love presided over with care and attention to detail.

There were many loud voices in the surrounding community that did not want the theatre. The main complaint being noise from the theatre speakers. The residents of Walcott Street had complained that the screening of films was interfering with their sleep. It was suggested that the area be de-zoned from business to residential and the theatre’s permit to show pictures be withdrawn. The proprietors (registered as Abraham Machlin & Son) assured the council that every effort would be made to reduce the sound level. Technical advice was sought and the speakers were tilted toward the ground with some positive effect, and it was thought that once the freshly planted Poplar trees grew that it will create a barrier and cut out some of the noise. There were also rumblings from competing cinema owners regarding the close proximity of the Menora Picture Gardens to their theatres. This created a serious problem in obtaining early release movies. Never-the-less, the Picture Gardens flourished as loving attention was paid to planting trees and enhancing the foliage. It wasn’t long before the theatre’s newspaper advertising carried the slogan, “W.A.’s most beautiful Picture Gardens”. 17 months later during the winter months, Abraham accompanied by his wife Esther and son Max enjoyed a family night at the Astor Theatre, Mt. Lawley, which at that time was playing Jane Wyman in “Cheyenne” & Robert Mitchum in “Crossfire”. Upon their return home Abraham complained of some chest discomfort. The following morning 28th June 1948, Abraham Machlin collapsed suddenly at the family’s Third Avenue, Mt. Lawley residence, and died at the age of 53.

The funeral was held at the Jewish cemetery in Karrakatta - Nedlands City, and with his family around him Abraham was interred in a Jewish Orthodox plot. He left behind a wife Esther, a daughter Leah, and three sons, Jack, Amos & Max, who were left to ponder in their grief the reality of life without him. His dream had been to build a hard-top cinema next to the Picture Gardens, however this had been long delayed because building material during the World War II years were in short supply. Throughout his lifetime Abraham had maintained and enduring love of cinema, and even before building the Menora Picture Gardens had been an investor in the Luxor Theatre, Sterling Street, Perth. The Machlin family continued to operate the Picture Gardens during summer months, and in the early-1950’s decided to go forward and honour the unfulfilled legacy of Abraham.

The Menora Theatre would be built by his sons Jack, Amos & Max (possibly at the time the youngest cinema owners in WA) It was decided that the boys would actively assist the builder to keep the costs down. The theatre was to be located alongside the already established Menora Picture Gardens.

Celebrated theatre architect Samuel B. Rosenthal was contracted to design the building. Construction to be on a single level Art Deco style by using cement bricks supplied by Dunbrick(WA) Ltd. Local builder Steve Perica would supervise the construction. The capacity of the theatre would be 800 to feature wide-seat spacing with concealed lighting installed in the auditorium ceiling. A substantial modern proscenium arch was to be created to house royal blue drape curtains. These would enhance the appearance and atmosphere of the auditorium and co-ordinate with the seating, carpeting and architectural details. The foyer of the cinema was built in the shape of a boomerang and the floor lined in Mediterranean terrazzo. The plaster mould ceiling to be fashioned in the shape of a chess board, displaying squares of various colours. The completed building measured at 132ft x 57ft. The projection equipment consisted of Centrex projectors and bases, fitted with 14 inch carbon arc lamps, while the sound system was driven by a Westrex 20 amplifier.

The Menora Theatre was opened on 20th May 1954 with the Samuel Goldwyn production of “Hans Christian Anderson” starring Danny Kaye. This was presented on a wide panoramic screen. The night was officiated by Mr. M.E. Hamer, Chairman of the Perth Road Board who congratulated the Machlin family on the design and presentation of a magnificent cinema. Many local industry identities attended, including RKO Pictures who supplied the opening programme. All proceeds from the night went to the James Mitchell Spastic Centre, a favourite charity of the late state Governor. CinemaScope was installed the following year with a screen which measured an impressive 36ft wide. Max Machlin remembers that the screen masking has a tendency to jam, and on a number of occasions it required a dangerous scramble into the roof cavity, and a quick journey across the ceiling to the proscenium to free the track. The exterior of the Menora Theatre was designed along squarish modern lines, while the name of the theatre was mounted over the front entrance in large metal letters. There were many local business that contributed. Boans of Perth made and supplied the curtains & drapes, while Carlyle & Co. Ltd. of Hay Street supplied the lighting. The latest Dunilopillo seating was installed.

The Menora Theatre was centrally placed and ran profitably until October 1959 when television was introduced. Over the next two years the box office receipts fell gradually to nothing. In 1961 the family was forced to close both the Menora Theatre and the Picture Gardens. The projection equipment from the cinema made up of Centrex projectors and Westrex Sound was sold to Arthur Stiles of City Theatres for £2,000, who immediately installed them into their prestigious Piccadilly Theatre in Hay Street. Some years later the equipment found its way into the Grand Theatre in Murray Street. (My grateful thanks to Roy Mudge for this information). The Menora Theatre was modified into a squash court and a building containing 9 housing units was constructed over the site of the once beautiful Picture Gardens. The car park became a supermarket (thought to be the first operating supermarket in the area of Perth). Eventually in time becoming an antique shop on the 1980’s, the theatre became a Beefeater Restaurant. In 2020 it is operating as a Thai restaurant and beauty saloon (Haus of Style).

Esther Machlin the wife of Abraham passed away at the age of 83 on 6th November 1983, and is interred alongside he husband at Karrakatta. The journey of Abraham & Esther is the stuff of movies. Abraham immigrated from Russia to Palestine in 1919. Here he courted and married Esther Arkin. Over the next few years they had their three children and made a decision to come to Australia and pursue a new life. As a family they arrived at the port of Freemantle in 1928. A fourth child named Max was born. Today the surviving children are Amos & Max.

Footnote:- The ‘Menorah’ is a multibranched candelabra used in Jewish religious ceremonies. The area known as Menora was once part of Mt. Lawley. It was included in the land originally granted to Charles Bourne in 1840, but the actual subdivision did not commence until the 1940’s. The current name was chosen in 1954 and was influenced by the Menora Theatre in Walcott Street. Quite simply, the suburb was named after the Menora Picture Theatre, a tribute to the vision of Abraham Machlin and his family, “Pioneering Picture Show People”.

Legend:- It is said that if you hold your Melways Menora page up to a strong light, the streets of Menora (which is close to Coolbinia) will take on the shape of a Jewish ‘Menorah’.

The Thai(Not Tai) restaurant us Siam Thai. There was restaurant before the Thai restaurant(British). i think was called Beefeaters(there was a picture of a Beefeater on the restaurant sign(and possibly on the building as well?)!?

The indoor Menora Theatre opened on 20/5/1954 with “Hans Christian Anderson”.

The picture gardens site became housing units. The carpark became a supermarket(name unknown?,(possibly the first supermarket in the Perth area?), and then a antique store(name unknown?), unknown if still open as an antique store?). This theatre building should be heritage listed!? Unknown if any of the inside of the picture theatre fittings or fixtures remain anymore?

The address is now 340 Walcott Street. There is now a beauty salon(Haus of Style) in this building too(possibly the former childrens clothing store(Goldilocks), or next door to it?).

There is also a hair salon(Eros), a cafe-restaurant and functions venue(Kafei-Van @ Walcott), a Muay Thai boxing gym(Legends Academy) in this building too. The Thai restaurant(Siam Thai Restaurant) has closed down.