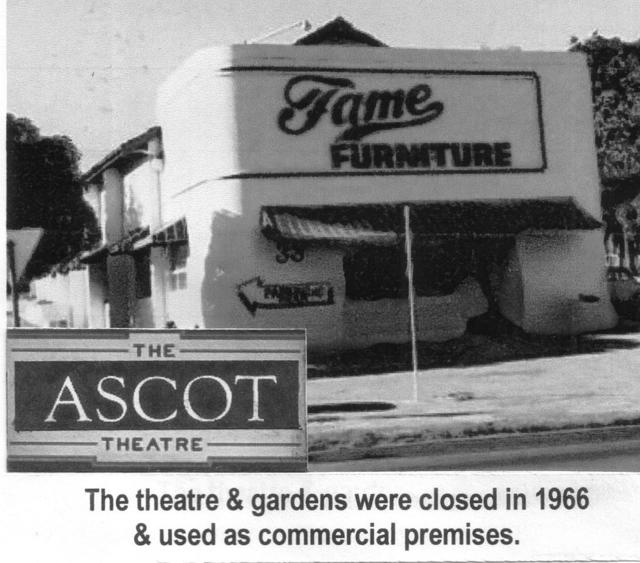 Located on the corner of Great Eastern Highway and Norwood Road. The Riversdale Public Hall opened on 22nd February 1919. Films were shown there from very early(perhaps from the beginning). The name of the buolding changed from the Riversdale Public Hall to Rivervale Theatre (The name of the suburb changed from Riversdale to Rivervale) in 1935(?). The name changed to Ascot Theatre(date unknown?). The Gardens were opened in 1948. The Ascot Theatre and Gardens closed in 1966, and became Fame Furniture, and then a courier company. The Thetatre building has been demolished and is now a office building(MTA WA).

I have lived in Rivervale, a suburb of Perth, Western Australia, for over 30 years, and wish to correct a few errors of fact and spelling in this listing for Ascot Theatre and Gardens. First and foremost, the suburb was NEVER called Riversdale (athough that was proposed by some), ONLY Barndon Hill, followed by Burswood, then Rivervale from 1929. Second, it is my understanding (possibly incorrect) that the name changed from Rivervale Hall to Rivervale Theatre during the mid 1930s (maybe 1935?) following a restyling of the building (not buolding!) into Art Deco style. Not sure of the name prior to the restyle, or before the 1929 rename of the suburb. Third, I’m not sure when the name changed to Ascot Theatre and Gardens, but quite possibly around 1948 when ‘outdoor’ cinemas became popular during Australia’s hot summers, and before television gained supremacy for ‘viewing preference’. The cinema building was demolished in the mid 2000s and replaced with the modern office block that occupies the site now (2017).

Would the demolision of the theatre building been because of the widing of Great Eastern Highway after roadworks along there?

Where was the gardens part of the theatre?

Greg Lynch SAYS – To answer David Coppock’s question regarding the location of the gardens : Some time during 1948 an open air theatre was built on the right hand side of the cinema, thus becoming “The Ascot Theatre & Gardens”. The term gardens were a stretch as there was very little greenery, however on the positive side the sight-lines were excellent and the stepped canvas seating (300 capacity) more than adequate. The standard ratio screen was erected with it’s back to the highway and it was a pleasure to sit under the stars on a hot summers night in the comforting bosom of the new open air gardens…

Greg Lynch SAYS – David Coppock asks – Would the demolition of the theatre building have been because of the widening of Great Eastern Highway after the roadworks…Answer: The new highway has taken part of the car park that existed previously in front of the original building..The theatre building has gone forever and has been replaced with a new office building –