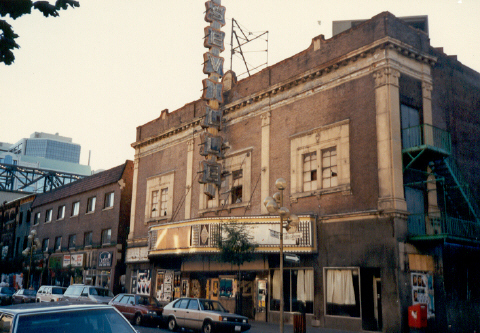 As of 2001, the east wall collapsed. Interior gutted and marquee removed. Heavily braced against further collapse.

The building was demolished in October 2010, to make way for a commercial/residential project named Le Seville.

Here is a January 17, 2008 blog that discusses renovation:
http://tinyurl.com/3aaxkx

What’s especially tragic about the loss of Seville is that when she closed as a moviehouse, she could’ve been preserved in a similar manner to that of Toronto’s Runnymede Theatre.

They retained Runnymede’s character by incorporating it into her new incarnation as a Chapters bookstore. If you don’t know what I mean, go here—>
http://www.flickr.com/photos/cinemarie/3337078982/

I really wish they’d do this to old theatres more often, instead of gutting. Poor Seville.

They’ve begun tearing down the deserted block, where Seville’s ruins stand. Her days are numbered. My guess is that within 1-2 weeks time, we’ll be changing her status to “demolished”.

The developer “Prevel” has put up some old pictures of the Seville Theatre during her glory years on their blog. A condo unit is about to replace the wreck of Seville, and judging by the lineup around their newly constructed offices, units are selling like hotcakes—> http://condosleseville.blogspot.com/

From the blog: “The demolition of the former site of the Seville theatre began officially on Tuesday, June 8, 2010. A press conference was held in downtown Montreal, on the site of the future housing project, at the corner of Sainte-Catherine and Chomedey Sts. Mayor GÃ©rald Tremblay, the president of Claridge and Jacques Vincent, co-president of PrÃ©vel, have each expressed their pride in seeing this project of 450 new condos becoming reality. The ground floor will be occupied exclusively by businesses giving onto Sainte-Catherine St. Here is a preliminary rendering of Le Seville.”

The Seville is in demolition as of today. (Oct 5, 2010).
The website spacingmontreal.ca has an article about the
demolition. A browse under the “category” may reveal
more about other cinemas and theatres.

There are other Spacing links for Toronto, Ottawa and
Halifax.

“The Sound of Music” premiered at the Seville 50 years ago today. With a reserved-seat run of 98 weeks, do you think it is the long-run record holder for this venue?

D.J. Crighton architected the atmospheric Seville. Crighton admitted that the neighborhood house of 1,200 would be modest on the exterior for cost purposes and he’d concentrate on the interior. He would create a weathered atmospheric Old Spain look on the inside with weatherbeaten walls and weathered ornamental iron.

It was the 14th theater in the United Amusements Circuit and made such a splash that other area theaters followed in the atmospheric footprint even outside of the main downtown areas. Patrons were greeted with water splashing over rocks and — as a second-run family theatre — children were entertained by the curious live fish and caged canaries nearby. Passing into the auditorium through the majestic grand entryway revealed a Spanish villa. Here, Crighton said the Seville would focus on the villa’s setting and de-emphasize a stage or live presentation. The show was in the sidewalls and ceiling and day and passing clouds turned to nighttime and stars. The theatre was a charmer.

In the TV era, second-run houses were under pressure and the theater added live pop shows. But the Seville could have changed its name to The Sound of Music Theatre when the family-oriented theater scored a huge film hit with that title playing nealry two years. The theatre also enjoyed success as a rep house running right up to the home video era. By then, its heyday was well behind it ultimately closing and being removed from the cityscape. Here, its modest exterior didn’t help keep it as other theaters which did survive.

The question of the architect of the Seville is covered by Dane Lanken in Montreal Movie Treasures: Crighton put the Seville on a list of his work compiled 10 years later; but the plans are signed Cajetan Dufort. The consensus of the city heritage directory and the Biographical Dictionary of Architects in Canada, quoting Contract Record, 25 July 1928, is that the architect was indeed Cajetan Dufort. Does dallasmovietheaters have any sources or further details?