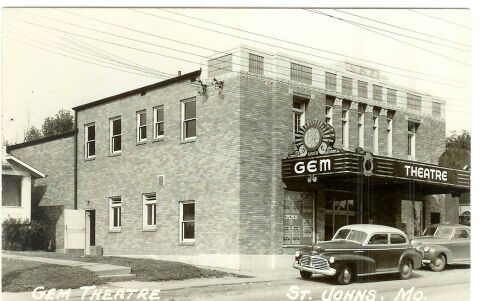 The Gem Theatre was located in the St. Louis suburb of St. John. It opened in 1926. It was operated by Henry Holloway who operated other suburban theatres such as the Beverly Theatre.

The Gem Theatre went through a complete remodel and reopened on November 23, 1935. A fire on August 24, 1944 began at the rear of the theatre and part of the roof collapsed. The front of the theatre remained intact other than smoke and water damage. The fire caused some $60,000 in damage.

When repairs were made the Gem Theatre reopened on January 16, 1946. They faced another problem at this time as the stagehands began picketing the theatre because there was no work for them. The controversy went on for sometime. The Gem Theatre then took a smoother road and General Cinema assumed management in the 1960’s. The Gem Theatre closed in 1969 and the Mid America Chain reopened it June 19, 1970 as the Art Theatre.

It changed names again in the 1970’s and became the St. John Cinema. Mid American dropped it from their chain in 1977. It continued as an independent for several months and then closed.

It resumed business under the management of Harman Moseley. The kids of the neighborhood were doing the theatre more harm than good and on April 29, 1979 two police officers demanded that the show stop so that they could sesarch the premises for a couple of suspicious youths. When they failed to present a warrant to Moseley he turned them away.

Early the next morning there was a fire that did damage to the amount of $100,000. At first is was blamed on a faulty pop corn machine. A couple weeks later Moseley received a letter from a neighbor explaining that the fire was set by the two police officers. The two police officers were arrested along with a sergeant for arson. The theatre never reopened.

The building is still standing today and is a van conversion shop.

Here is some more information about the fire:

Defendant City of St. John appeals from a judgment for plaintiff St. John Bank & Trust Co. in an action for damage to property caused by a fire. The fire was intentionally set by a member of the St. John Police Department. The fire giving rise to this suit occurred during the early morning hours of April 30, 1979. It is undisputed that the fire was set by Sgt. Dunn, a member of the St. John Police Department, while he was on duty. Plaintiff contends that the fire was the last of a series of events which constituted harassment of the theater operators.

From the evidence presented the jury reasonably could have found that the operator of the theater had been subjected to a pattern of harassment by members of St. John Police Department prior to April 30, 1979. The police made a practice of interfering with the theater’s customers, refusing to allow them to wait outside the theater before entering, and taking down license plate numbers of customers' cars. There were two instances where the police stopped movies in the middle of shows to conduct searches of the theater; once allegedly to look for minors consuming alcoholic beverages, the other to look for unaccompanied minors watching an “R-rated” movie. There was also an incident involving a 16-year old girl employed by the theater who was told by one officer to “open her blouse or he would blow her head off.” There was also evidence showing that those acts which were arguably proper police work were completely groundless and unwarranted.

On Sunday, April 29, the night before the fire, there was no incident at the theater. The evidence did reveal, however, a serious breach of proper police conduct by a number of officers. That night, as the shifts were changing, Sgt. Dunn arrived for work with a quantity of beer. He and three other officers stayed in the station for a time drinking beer. While there, Sgt. Dunn took out a gun and began firing shots into the wall of the police station. Then the four went to an unmarked police car and began driving around the city. During this drive Officer Dunn fired shots at a black man who was walking down a street, and also shot at a cat, a car, and the door to the movie theater. The four then returned to the police station. Later the next morning, Dunn set fire to the theater.

I saw 2 movies here (that I know of): “The Pink Panther Strikes Again” and “Murder By Death.” Saw them both with my father in 76. I especially remember seeing the trailer for the 3rd Dirty Harry flick “The Enforcer” before “PPSA” and it scared me a little bit.

I can’t believe I actually found a pic of this old place. My family actually lived in an apartment above the theatre when I was born (1976). Now 37 years old, I live less than a block from the original location!