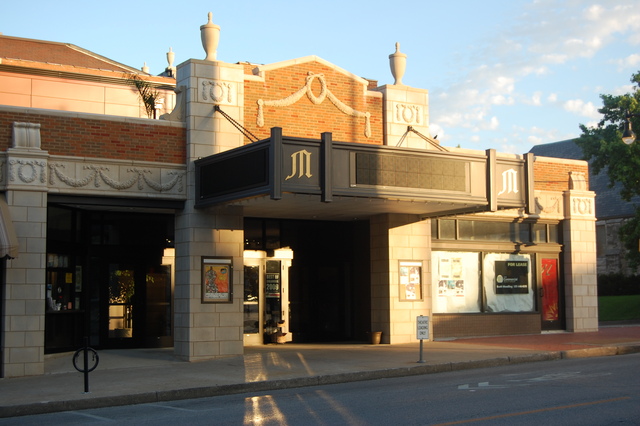 The Missouri Theatre in Columbia is elegance at its best. Bob Hope once appeared here. The Baroque style house is a true movie palace. A survivor of an era of fantasy and anachronism of true beauty.

The Missouri Theatre was designed by the Boller Brothers and is the only movie palace in Central Missouri. The magic of this theatre took its patrons back to the days of eighteen-century France. Past the outer foyer into the grand, red carpeted lobby with gold leaf on the walls are the grand staircase, the inner foyer and the entrance to the auditorium.

The auditorium mingles romance and adventure in its decor. The central chandelier weighs 1800lbs, and has over 200 light bulbs and its sparkling crystal.

The orchestra seats 800 and the balcony 436. The theatre is adjacent to the Missouri University campus and some classes are held on a regular basis at the theatre.

The proscenium arch features a stationary red waterfall curtain over silver velvet on travellers, which opened to reveal the CinemaScope screen.

The Missouri Theatre opened on October 5, 1928 and celebrated its 50th anniversary in 1978. The theatre was first a vaudeville house with top acts and names. In 1953, Commonwealth Theatres took over the palace and has kept it in a top-run movie house since. The theatre has kept much of its original furnishings and features. But it has also been remodelled and up-to-date. One remodeling was completed in 1960.

The Missouri Theatre still crowns Columbia as an architectual gem. It remains special in its lavish surroundings and unique in that it’s one of the few palaces to remain intact not divided into several theatres. This theatre remains an elegant movie palace.

The Missouri Theatre was listed on the National Register of Historic Places in 1979.

This description is out of date. Movies are shown here, but only as special events. It has been owned by the Missouri Symphony Society for a while now.

Here is a webpage with some information:
http://www.discoverthedistrict.com/strollway.html

The original theatre organ from the Missouri Theatre is up for sale! It is a 3/7 Robert-Morton built in 1928 and is apparently mostly complete.

It would be REALLY nice if someone in MO could buy the organ, restore it, and re-install it back in the theatre!

Keeping up with movie theatres is difficult. Here’s an article about Columbia’s theatres, including the Missouri Theatre – no longer primarily showing movies, but live performances. By the way, the Missouri Theatre was not the only “movie palace.” At one time, Columbia had three movie palaces on one street, all with roughly 1,000 seats. Two are still used for entertainment, the third is a restaurant. Here are the details on movie theatres in Columbia. http://columbiabusinesstimes.com/8240/2010/06/25/capturing-columbia%E2%80%99s-cinema-century/

The Missouri got a new marquee in 1967, according to a Nov. 26, 1967 story in the Columbia Missourian. That article also said that the Missouri opened on May 18, 1936 with “The Traveling Saleslady.”