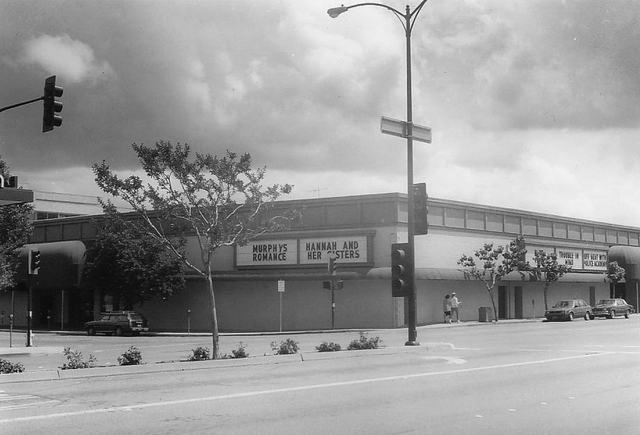 This was my favorite theater growing up. A lot of ‘classics’ (mind you I’m a child of the 80s) I saw at this theater and fondly remember. This was also the theater that inspired me to get into the film industry. My God Mother took me to see the ‘muppet movie’ when I was a kid here and her daughter was a theater manager. she took me to the projector room after the film and being up there just ‘inspired’ me to get into this industry. About 15 years later I saw my first screen credit in that theater. This year I had my biggest screen credit yet and would have loved to have seen it there, sadly. It’s gone.

I worked at the festival w.c. 1984-1987 and enjoyed it a great deal. I don’t recommend a movie theater as a first job because it will make you hate most future occupations. We would turn out all the lights after closing, grab flashlights and headsets, and engage in a creepy (pre laser tag) hunt occasionally. Also running employee only sneaks of films like Aliens, Untouchables, Brazil, and Clan of the Cave Bears (what the hell WAS that scampering noise in the booth!) was quite memorable.

Having been a former “real” projectionist, which required union membership, and apprenticeship when carbon-arch projection was the main source of the single screen theater, I hated (and still do)the multiplex theatre-type of operation.

But of all the “bird cages” that were built, I must say the Festival in Walnut Creek was, at least, the nicest of all that I have seen.
I remember the arcade booth upstairs. I believe the same company opened the Regency in Pleasant Hill. These two multiplexs were very nice for that type of operation, but if you saw the Roxy Theater in New York, or the Fox Theater San Francisco, or the Radio City Music Hall, you will know what I mean by the term “bird cages.” I even used to call the Enean (Concord) and El Rey (Walnut Creek) Theaters “fly traps” compared to the large monster theaters, but the suburban theaters had a nice intimate atmosphere. The Orinda is a fine example of a gem.

The Festival could not last for the same reason the single screens disappeared – first, there was “twinning” – converting a single screen into two auditoriums….then the “four-plex” and along came the Festival (done in good taste)……movie distributors simply
sought out the larger complexes and ignored the smaller ones.

Now, they are tearing down 12 to 16 multiplexes in favor of larger ones. I certainly do not care for today’s designs and colors of
these new “broom closets.”

At least, the Walnut Creek Festival had taste in designs!

I worked here from 84 to 87 or so. Fun job. Fond memories of bloo spooge, cleaning the drains under the drink machines, butter flavoring.

I got free tickets (like we didn’t get into whatever we wanted free anyway), when I cleaned up puke on I think side 1 when Gremlins was playing there and some kid couldn’t handle the microwave scene. Good times.

I use to work in the Tishman building on N California Blvd., don’t believe the theatre was torn down in 1981, because I do remember going here in 1994 to watch Quentin Tarantino’s film ‘Pulp Fiction’ with a friend.

I worked as an usher at FC5 from 1980-1984 then transferred to Regency in Pleasant Hill while I was going to DVC, til ‘87. I got the job at 15.5, thanks to my Mom who was a nurse at Rossmoor Manor and one of the owners Mom’s was her patient. I remember the first week I started a little movie came out called….EMPIRE STRIKES BACK!!! LOL! Great memories at the Festival Cinemas and great coworkers and yes I avoided the candy counter as much as possible!!

I too worked at Festival Cinema Center. I was the manager there. I think I stayed with the company for about a year while I lived in Concord. Those who worked with me would remember me as TURK or Aytac. Often wonder where they are now..

The Festival Cinemas 5 opened on Wednesday May 28, 1969 (coincidentally the same day the Capri theatre in Concord, CA opened). It originally opened as the Festival 1 & 11 with two screens. The first features were WINNING starring Paul Newman and THE LOVES OF ISADORA starring Vanessa Redgrave.

The Festival 1 & 11 would expand to (5) screens becoming the Festival Cinema Center on Wednesday June 30, 1971. The films playing were: