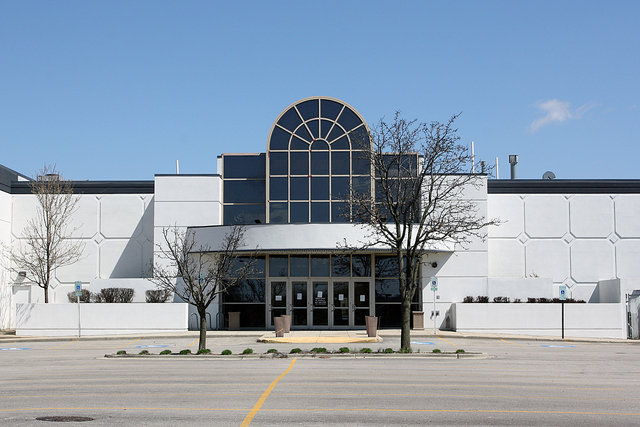 The Rolling Meadows Theater opened in 1993 by Sony Theatres. It later became a Loews theater. It was best known for showing independent, art, and foreign films in the northwest suburbs. In 2000, Loews/Cineplex opened an 18 screen theater at the Streets of Woodfield shopping center in nearby Schaumburg.

The Rolling Meadows was closed in 2000 by Loews/Cineplex due to an understandable decline in attendence. The former theater is now home to a banquet hall.

They were about 3-5 minutes away from each other. But you’re right that they were the only ones around showing art/indie after the theatres inside woodfield closed and before Streets of Woodfield open. They certainly showed plenty of first-run action and the like too. Incidentally the electronic box office sign from Rolling Meadows now leans against an escalator at Streets of Woodfield, partly hidden and doing nothing. Not sure why they salvaged that…

I was very impressed with the design of Rolling Meadows, and I saw some outstanding “little known” (at the time!) films there, such as “Sling Blade” and the Ian MacKellen version of “Richard III.” I remember that I first got directions to the theatre because it was the only place showing “Sling Blade.” By the time I found it and got into the show, it had started. I was so awestruck by the opening interview/monologue by Billy Bob Thornton’s character Carl, I went back a few days later to watch the entire film again, just to see the first 4 or 5 minutes and the beginning of the speech!

It’s a shame that these nicer “little” theatres get swallowed up by the megaplexes (which generally have no personality), but the memories are fond.

The Rolling Meadows was nice. I had to go there once for a corporate web cast. The company I worked for at the time rented the place for the afternoon.

I also remember going to see one of those Choose Your Own Movies here, where you had 4 options (red, green, blue, and yellow I want to say) and the audience vote decided what would happen next. My brother and I sat a bunch of seats apart and would walk down the row pushing whatever button option we wanted. I think I only saw 1 movie like that there, and have no idea what it was called or about. The theater itself had a bunch (6 or 8 maybe?) of large rear-projection TVs playin trailers and ads looping constantly, and when the Streets of Woodfield (formerly One Schaumburg Place) theaters opened, they moved 4 of the TVs to Woodfield, even though now-a-days physically huge TVs like those aren’t anywhere near as cool as a 50" flat screen.

I read an October 1979 story in the Daily Herald about the possible demolition of the Rolling Meadows Theater, which at that time was owned by the Kohlberg family. Since the introduction gives a 1993 opening date, the 1979 story leaves me a little confused.

Maybe not so confused. This might have been an aka for the Meadows theater.

I liked this theater. I remember the lobby area being echoey (with tile floors) and all white, with a very modern, sterile, corporate vibe. We used to call it “the airport”—the movie titles and showtimes were presented on electronic display boards, in exactly the same format as airline flights.

At the time, it was a big deal for independent movies to play in the conservative northwest suburbs. I remember watching the 1994 lesbian film “Go Fish” there in an almost-empty theater, and being amazed at where I was.