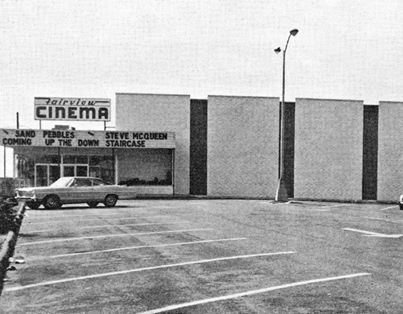 The 800-seat Fairview Cinema was located in the Fair Ridge Shopping Center on Bergen Boulevard, Fairview Township. It opened on June 21, 1967 with Julie Andrews in “The Sound of Music”. On December 21, 1979 it was twinned. It had closed on July 20, 1989.

This was a Loew’s house

I used to see movies there all of the time. In fact, one of the movies I saw there was Rocky II, which had the best audience reaction to a movie I’ve ever seen/heard. Sadly, the last movie I saw there was Max Dugan Returns, which was a steaming heap of garbage. I’ll never forgive my cousins for choosing it that day.

The Fair-Ridge Shopping Center opened theatre-less in 1961 in Fairview, N.J. In 1967. That changed when Spyros Lenas left the Skouras chain and launched his own circuit including the creation of the Fairview Cinema. It was Lenas' seventh theatre seating 800 and launched June 21, 1967 with “The Sound of Music.” The cinema was located at 211 Bergen Blvd. and featured an art gallery featuring artworks from local artists.

Despite the fact that “The Love Bug” was the theater’s number one film of 1970, the Fairview showed some X-rated fare. In 1973, that reached the boiling point as protesters picketed a double feature of X-rated films. Mayor V. Michael Rossi intervened convincing theatre management to terminate X-rated films.

The Fairview switched back to mainstream films including cult films at midnight. On December 21, 1979, the theatre was twinned becoming the Fairview Twin Cinema 1 & 2.

In 1981, the theatre was operated by Loews as the Loews Faireview Twin Cinema 1 & 2. In 1989, the expansion of the A&P Grocery Store led to the demolition of the Fairview which Loews closed on July 20, 1989 with “Weekend at Bernies” and “Ghostbusters II”. The cinema was demolished shortly thereafter.

Most moviegoers would then go to ridgefield park or secaucus if they wanted to use their loews passes.