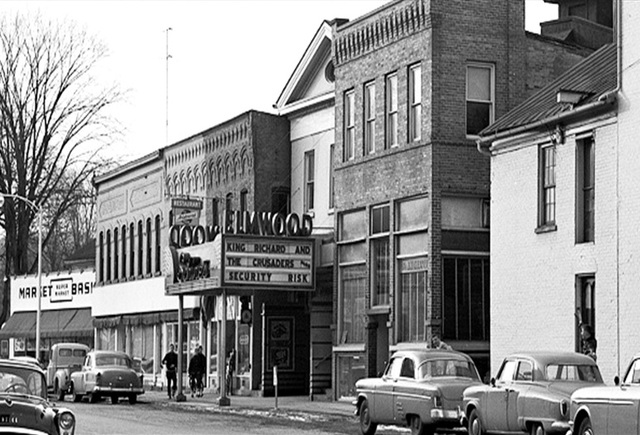 About to be demolished (October 2003) this theatre has been functioning as an indoor tennis court for two decades, with the remnants of balcony supports and fabric wall coverings still in evidence.

According to a local 1951 newspaper article, the Elmwood theatre was built between 1920 and 1921 by Harry C. Morse “ a noted Keuka Lake steamboat captain and famed for catching a lake trout on his nose as a youngster”. (!) on the site of the fromer Shearman Hotel…“Contractor for the tearing down of the old Shearman house (a favorite stopover for Vaudeville folks in it’s hey-dey) and for the building of the new Elmwood theatre was Charles Kelley. Architects were Lembert and Sons of Rochester. Upon the death of Mr. Morse in 1936, the theatre was purchased by Wells Jewett and operated in cooperation with his sister-in-law, Mrs. Harry C. Morse,
the widow of the veteran movie show manager. In October, 1936, the Schine Theatrical Company added the Elmwood to it’s chain.” The theatre eventually came into possession of Countrywide Theaters, Inc. which eventually closed it circa 1971. After that a pair of local attorneys bought the property and indeed did convert it to an indoor tennis court. I went by the site today and the building is now entirely razed.

Naturally I have to chime in that this was a SCHINE theater. Great marquee for a little side street theater!

This theatre is included with photo on the following link listing theatres and drive-ins of Western New York State.

Lost: I just viewed the interior photo and could cry to think this Lempert, Jr. theater……is gone!

And it was used as an indoor tennis court for two decades! OMG!

My father was relief manager of the Elmwood in December of 1952 and I have added an image of a short newspaper article that appeared in the Penn Yan newspaper at the time. It would be interesting to know what the ‘Little Theatre Night’ was. Perhaps a local talent show night? Theaters in those days hosted a lot of stage shows in addition to showing movies.