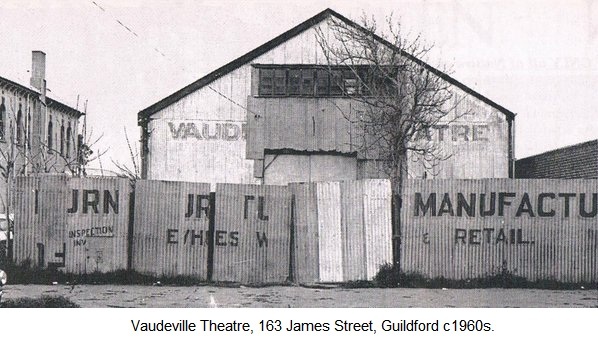 The Vaudeville Theatre was built for Mr. G. Hiscox, the former owner of the Guildford Hotel which sits alongside the theatre. The grand opening was held on 3rd January 1898 to a packed house with a burlesque production of “Sleeping Beauty” which starred Harry Neville. The theatre became a major social venue in the town with concerts and dances held on a regular basis. This included Gilbert & Sullivan productions and Negro minstrel shows. The Hiscox family organised many functions at the Vaudeville Theatre in conjunction with the hotel.

The King family of 61 Helena Street were instrumental in setting up the picture theatre. The first screenings were held on October 11, 1901 with “Soldiers of the Cross”. Later Wilson’s Picture Theatre ran silent movies with Mrs. C. Gillon and later Pladey Headry on the piano. The open air picture gardens were located to the west of the Vaudeville Theatre.

Following the outbreak of World War I the theatre was used for charitable activities. In the main monies were raised to assist widows and the children of soldiers. The exhibitor was now George Hall who built the Regent Theatre also located in James Street. The Regent Theatre opened on 8th March 1926 with Samuel Goldwyn’s silent film “Dark Angel”. The Vaudeville Theatre immediately ceased screening movies, however the building remained and was at first used as a social centre for clubs, such as the United Kingdom Natives Association, and later the Bohemian Club, then as a billiard hall. In 1947 it became a furniture factory, and then in 1966 a panel beater business which continued into the 1990’s. The Vaudeville Theatre building is still standing, however it has been extensively renovated into a 500sqm warehouse with a soaring ceiling truss. New floors have been laid along with reinforced structural timbers and there are now fully lined walls and the property has been re-roofed and rewired. The building is now being used as an antique store, supplemented with a toy museum!

State Heritage Office statement:- The Vaudeville Theatre has limited significance however contributes to the history of the locality through its social history rather than its built form; or may be a historic site. The building is on the Guildford heritage walk trail.

There was a fire in some nearby antique stores and a cafe on 25/12/21 at 12pm that is suspected to be arson. Unknown if the Vaudeville Theatre and the antiques store(Jones of Guildford) were damaged?