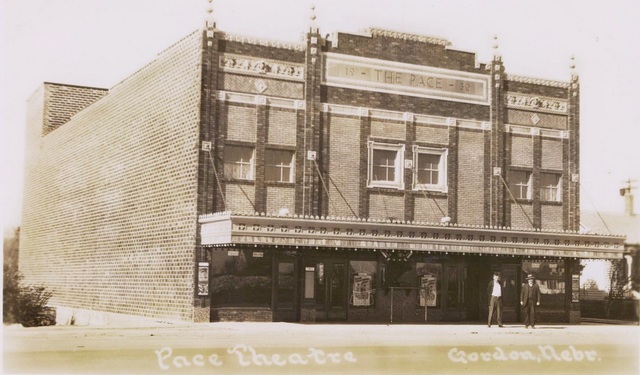 The February 2, 1940, issue of The Nebraska State Journal reported that a fire early the previous morning had done $50,000 damage to the Pace Theatre building in Gordon, leaving the town without a movie house. Only the four outside walls were left standing. The Pace Theatre had been operated under a lease by the Black Hills Amusement Company for theater owner J. W. Pace, who planed to rebuild.

The Pace Theatre opened replacing the Empress Theatre on September 7, 1930 by Mr. and Mrs. James W. Pace. It opened with Will Rogers in “So This is London” supported by a two-reel comedy and newsreel. Clyde Pace managed the venue while his brother, Archie, worked at Chadron’s Pace Theatre.

Black Hills Amusement took on the venue when Pace retired on January 1, 1935. On January 31, 1940, a fire occurred gutting the interior leading to the New Pace. It relaunched on July 12, 1940 with Bob Hope in “The Ghost Breakers.” Just shy of its 30th/40th Anniversary, an April 9, 1970 fire once again gutted the venue. The Pace, therefore, ended with the April 8, 1970 screening on “The Savage Wild.” The building was then demolished.