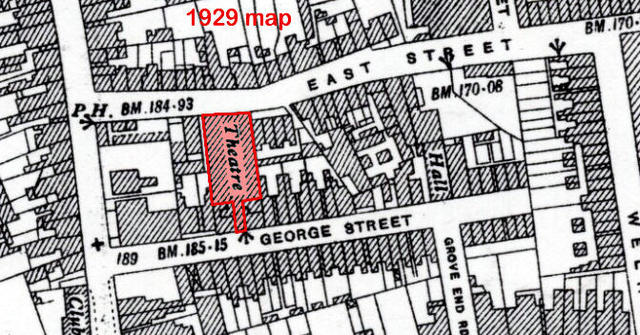 Opened with the dual name of Theatre Royal & Opera House in 1875. It was rebuilt after a fire and reopened as the Empire Theatre & Theatre Royal in 1889. Likely to have been the first venue to screen a film in the town when an evening of “animated pictures” was presented on the Velograph System by Albany Ward in 1899.

It continued a mix of film and frequent stage shows to the end which came in December 1954, Acquired by the Granada Theatres chain, it was not reopened and was was sold on 1956. It became a depot and in the 1980’s the foyer block was converted into flats which remain today.

In the 1942 Kine Year Book it is listed as being owned by Picture House (Peterborough) Ltd., using Western Electric sound, with 740 seats (stalls and circle), and a stage 30 feet deep behind a proscenium arch 25 feet wide and with 7 dressing rooms.

The entrance was on George Street and the stage entrance on East Street, there is currently (August 2015) an application to demolish the East Street end and replace it with housing.

The Theatre Royal was owned by John Arthur Gamble OBE (1877-1947), a playwright born in Norfolk. He was the father of Judith Mary Gamble (1916-2004), aka Judy Campbell, about whom the song ‘A Nightingale Sang in Berkeley Square’ was written. Judy Campbell was the mother of Jane Mallory Birkin (1946-), who as Jane Birkin is an actress and singer, noted for her 1967 recording of ‘Je t'Aime …“.

In 1944 J.A.Gamble (as J.A.Campbell) is listed as Managing Director of companies which owned all the Grantham cinemas, with the exception of the State Cinema, later the Granada.