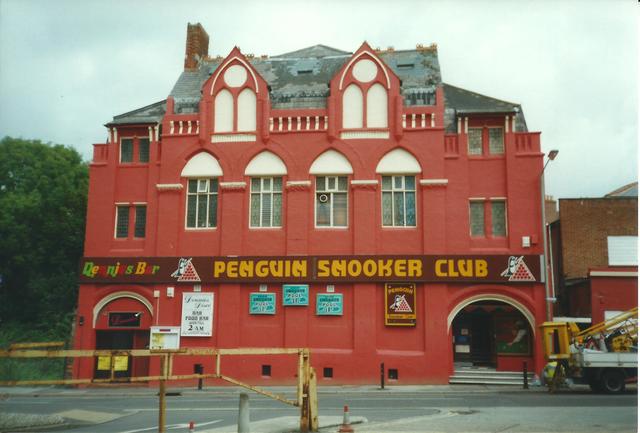 In Hastings, East Sussex, when the ABC/Ritz Cinema closed in 1971 Don Smith Enterprises Ltd. decided to turn the upper level of their bingo club into a cinema.

Due to the need to work around the bingo sessions, the building work took 18 months (plus a reported 25 tons of concrete, six tons of steel and £20,000) before the Penguin Cinema opened on Sunday 24th August 1974 with a reissue of the 1961 war adventure “The Guns of Navarone” starring Gregory Peck and David Niven. Late night weekend shows, and a children’s club, were tried, but were not successful.

Always confined to third-run films, the Penguin Cinema moved increasingly over to sex films (with the advertising slogan “If some of our scenes get a little too hot for you then why not cool off in our bar?”!).

Into 1976 the cinema was opened for evenings only. Then, in January 1977, the cinema closed midway through a week’s run of “Confessions of a Sexy Photographer” and “Versatile Lovers”.

In the 1990’s there were tentative plans to reopen the Penguin Cinema as a second screen, with ‘Penguin 1’ being built in an adjacent building, but these never materialised. Around this time the bingo club ceased, and the building became the Penguin Snooker Club, with Dennies Bar in the basement. It has since been demolished and Priory Square containing offices for the Saga Insurance Group and part of the college have been built on the site.