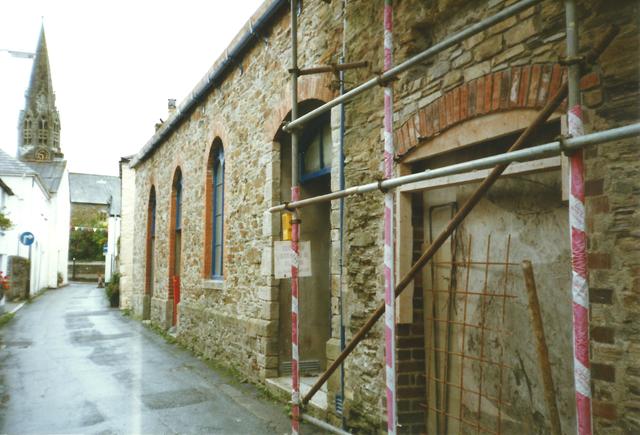 In Lostwithiel, Cornwall, the Glyn Cinema, owned by Henry Maitland Williams, opened on 7th April 1937 with Gracie Fields in “Queen of Hearts”. Situated at the junction of Church Lane and South Street, it had 495 seats and was a conversion of an existing works building.

In the 1940’s the seating capacity was reduced to 328. The screen was 10ft by 7.5ft, with a proscenium width of 20ft. It was equipped with a British Thomson-Houston(BTH) sound system.

The Glyn Cinema closed on Saturday 2nd April 1960. Mr Williams took up a position as a senior scientific assistant at the Dounreay atomic energy establishment in Scotland, but he didn’t sell the Glyn Cinema, despite various plans to convert it into a bingo hall or cabaret club. During the 1970’s he designed and built a flat within the cinema shell and, on his retirement in 1977, he and his wife (who had worked in the box office for many years) lived in this new flat until his death in 1994.

When I visited, in September 1999, some fairly major alternations/refurbishments, including a new roof, were being carried out.

Lostwithiel’s film society Lost In Film and the town Museum are holding a special event to commemorate the opening of the Glyn 80 years ago in 1936. The site has now been converted into houses. We are collecting photographs and memories from local people to use for our event on 30th April 2016. Would it be possible to use the photos here?