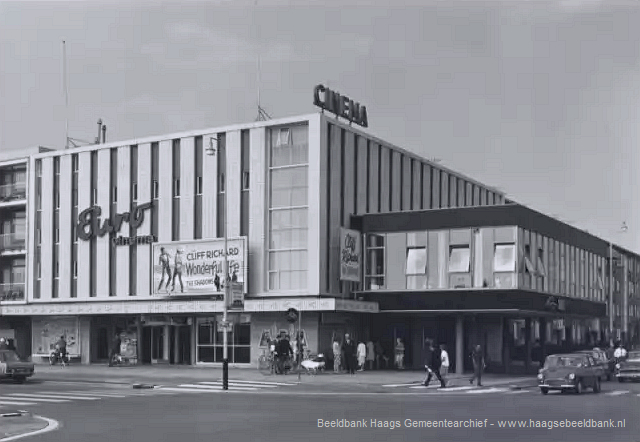 Euro Cinema had a great reputation in and around The Hague. The cinema was opened on 25th September 1963 by Queen Juliana, Prince Bernhard and Omar Sharif, protagonist in “Lawrence of Arabia”, the first film shown. In the next ten years, there were more than two and a half million people to the cinema, for example, to watch the “Sound of Music”, “Doctor Zhivago” and “Ben Hur”.

But the introduction of the VCR and the changing demographics of the Southwest, there were fewer people later anyway. After its closure in 1987 included a bank, toy store and furniture store based in Euro Cinema.

In 2005 Bouwfonds MAB held a competition to challenge young architects to come up with a plan for the cinema. The result in the Euro Cinema to the ground is going to make room for a maximum of 45 meters high new building. It should have been demolished in 2009, but the building is still standing there (2015). It was demolished in April 2017.

The black and white picture in the “Photos” tab is downloaded from “De Haagse Beeldbank” (www.haagsebeeldbank.nl) with permission. On the same website we find a picture of Queen Juliana at the opening here. More old pictures of Euro Cinema on this website can be found here.

The original plan in 2008 was to build luxury apartments. That didn’t take place because of the financial crisis. Now the plans have changed to build 65 social rental sector apartments. They will be delivered at the end of 2018.