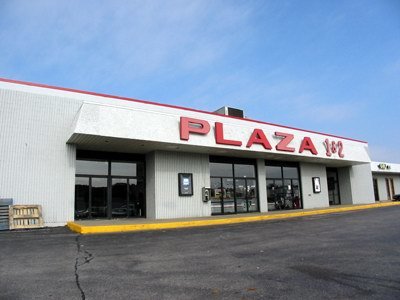 Opened as a UA Theatre bought by Jack Loeks Theatres April or early May 1992 turned into a discount theatre shortly thereafter.

Rolled by today and it appears it has been closed for quite a while, though a news article said it closed in May. It still stands, but appears completely gutted. Marquee gone and all counters and fixtures are gone from the lobby. From the internet;

The discount theater owned by Studio C closed on Tuesday, May 29, the owners announced on Tuesday in a news release.

“We love this city, and these are tough choices,” said Emily Loeks, director of community affairs for Studio C, in the release.

No explanation was given for the sudden closure.

Studio C also owns and operates the Cinema Carousel and Getty Drive In in the Muskegon area.

“The good news is that we’ve been investing in significant updates to Cinema Carousel and the Getty Drive in,” Loeks said in a statement. “Attendance at those locations has been increasing, as community members have discovered how much they enjoy the improved projection and sound at the Getty, rocker and reclining seats at Carousel and enhanced food and beverage options.”

The Harbor Cinema moved from 1937 Lakeshore Drive in Muskegon, MI after five years of operation to the former Plaza 1 & 2 location on December 28, 2018. The first-run theater also offered one-year memberships. However, the venue closed on March 15, 2020 after a magic show by Eric Yager due to the COVID-19 pandemic. The theatre “semi-opened” during the pandemic to sell popcorn and concessions hoping to ride out the issue. However, on August 14, 2020 it announced that the closure would be permanent making the Harbor one of many theaters which closed permanently during the COVID-19 pandemic.

The Harbor Cinema management stated, “It is with a heavy heart that we announce that we are staying closed permanently…. We had tried to do a couple fundraisers that we had hoped would get us by but no one anticipated having to be closed for 6 plus months and we had hoped that Congress would have passed a new small business funding bill before they left for recess. We want to thank everyone for a great 7 years! It’s been quite a ride and this is not how we had intended or hoped to end things….”