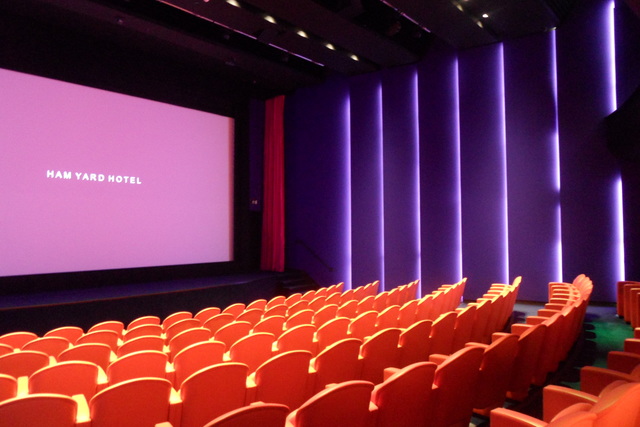 Kit and Tim Kemp’s Firmdale Hotels are known for their eccentric British design. Their portfolio includes New York’s Crosby Street Hotel and the Covent Garden Hotel in London. On 1st June 2014 they opened the Ham Yard Hotel, situated on a ¾-acre plot of land in the heart of London, off Great Windmill Street, just a short distance from Piccadilly Circus.

Their idea was to create a hotel with an “urban village” feel. So, the U-shaped hotel wraps around a courtyard filled with independent shops.

The complex includes a state-of-the-art cinema, situated in the basement. Used during the week for conferences, business presentations and the like, on Sundays, in collaboration with art-house circuit Curzon Cinemas, it is open for public screenings. The auditorium has stalls and balcony, with attractive vertical cove lighting down the side walls.

In nice cinematic touches, there are posters for low budget horror/Sci-fi films (such as “Attack of the 50 Foot Woman”) in an adjoining corridor, and Chaplin’s silent classic “The Kid” was being screened on the wall above the bar.

It seems the Ham Yard Hotel Cinema was closed as a public cinema late-2015 or early-2016. It may be in use for hotel guests only?

Do my eyes deceive me or is there a set of red tabs?

Sadly, no films are being listed on the hotel’s website, and it appears that public film shows have ended. (Perhaps this is not too surprising: when I visited, on a Sunday afternoon in August 2015 to see “The Terminator”, starring Arnold Schwarzenegger, no-one else turned up. It was wonderful to see such a fabulous film in such luxurious surroundings, but it did not bode well!)