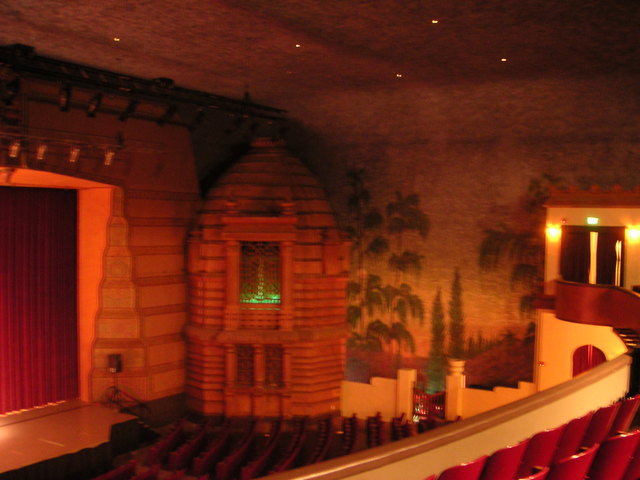 Built at the beginning of the Great Depression, the Fox Theatre in Visalia was a smaller version of its more grandiose cousins in cities like Los Angeles. It opened on February 27, 1930 with George O'Brien in “Lone Star Ranger” and Laurel & Hardy in “Night Owls”. It was equipped with a Robert Morton 2 Manual pipe organ, which came from a theatre in Los Angeles.

The Robert Morton organ was sold and removed from the building in August 1956. In an attempt to increase business, the Fox Theatre was triplexed in 1976. The Fox Theatre continued to show movies for the next 20 years but with the 1996 opening of a twelve-screen megaplex at a nearby mall, the beleaguered Visalia Fox Theatre shut its doors after sixty-six magical years, on November 7, 1996 with “A Long Kiss Goodbye”

Soon after, The Friends of the Fox took over the theatre and it was returned to a single screen auditorium. They have renovated the theatre and raised money for its rebirth as a community and performing arts center. It reopened on November 20, 1999 with composer/pianist Marvin Hamlish appearing on stage.

Ken names FOUR theaters of downtown Visalia. Could there have been a FIFTH existing at the same time around 1940 – 1965? In prox ‘48-'49 I worked at the Fox until 10:00 PM, then 'closed’ the one maybe three blocks east on the south side of Main. Which one was that?

Here is an undated photo of the Fox:
http://tinyurl.com/2p5oex

In the ‘60s, everyone from Mt. Whitney High School went to the Sequoia Drive-In east of town. The Mooney Drive-In wasn’t considered to be as “cool” as the Sequoia.

Belated reply to Tom DeLay’s question of Aug 8, 2007: The L.A. Library’s California Index contains a card quoting an item in a 1912 edition of The Rounder, which says that motion pictures were doing splendid business at the Bell Theatre in Visalia.

The Index also has a few cards citing 1910s and 1920s articles about plans for construction of theaters in Visalia, but names are not given for any of them, and its not clear which, if any, of these projects were actually completed.

Also, the June 26, 1943, issue of Boxoffice Magazine mentions a Bijou Theatre then operating in Visalia.

An interesting item in the October 7, 1946, issue of Boxoffice is a brief obituary of Okanosake Nakamichi, who it said had operated a theater in Visalia from 1911 until he was relocated to a prison camp in 1942. The name of the theater was not given, but given the prevailing attitude among Californians of that period I would imagine it served only Asian patrons.