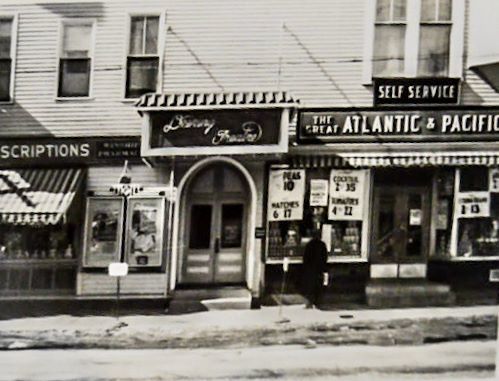 The Opera House was an old neighborhood theatre in Deering, to the northwest of of Portland, ME. It was opened in 1895. By 1934 it had been renamed Deering Theatre. It was closed in 1951. It became home to the Portland Players and was renamed Dollhouse Theatre. It was destroyed by fire in 1971

The Theatre Historical Society archive has the MGM Theatre Report for the Deering; it’s Card # 363. Address is Stevens Avenue. There is an exterior photo taken Feb. 20, 1941. Condition is Poor. The report says that it opened in 1900, was showing MGM movies, and had 354 seats.

The CinemaData Project says that the Deering Th. lasted at least until 1951.

An earlier house called the Deering Theatre operated on Congress Street in downtown Portland, but I don’t believe there was ever any connection between the two. The neighborhood house in Deering Center might have originated as the 400-seat, second-floor theater listed in the 1901-1902 Cahn Guide as the Hoegg Opera House, which itself might also have been the facility called Hoegg Hall or Hoegg’s Hall which was mentioned in several publications of the 1900s. The building suffered a major fire in 1905 and was rebuilt.

Yes, it had old antecedents- the MGM agent reported that it opened about 1900, so it would have been a stage theater at first.

Hoegg Hall/Opera House was built in 1895 at the north corner of Brentwood and Stevens Ave by canned goods pioneer, Daniel Warren Hoegg. It changed names to Deering Theatre, later Dollhouse, and was home the Portland Players and the Lyric Theatre. It was destroyed by fire in 1971.