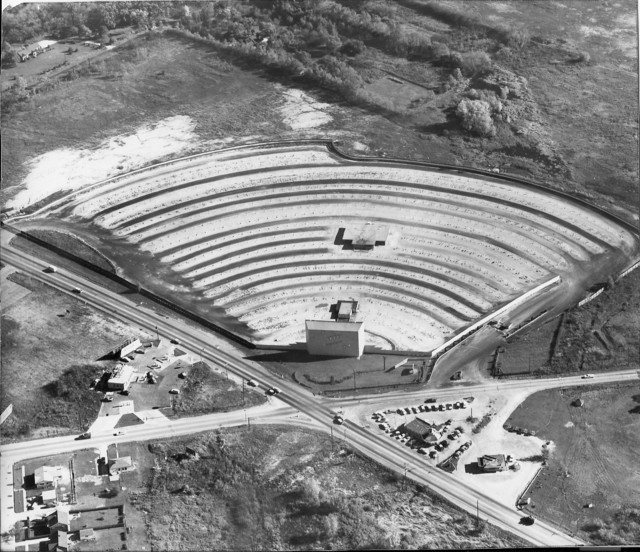 The Sky-Hi Drive-In originally opened in 1968 in Addison on Illinois Route 53 and North Avenue (IL Route 64) as a twin screen (one facing east and the other facing west) by M & R Theaters. It had a cafeteria style concession stand. It featured radio sound and had a playground where children would play. In 1985, it was closed and later in the 1980’s demolished. A home improvement store has been built on the site.

The address is correct, it just doesn’t exist anymore. Plus back in 68' the area was basically farmland getting ready to be developed. So when they describe it as being 2 blocks north of north ave., they mean the the next intersection north from north avenue…Which anyone who lives in a farming community knows 2 blocks could be a mile or two between public attractions, such as gas stations, restaurants or in this case a drive-In .

Aaron, I being a member of the family who owned and built the theater wish to clarify that the theater closed because it simply became simply too expensive with property taxes and everything else to operate the drive-in only a few months a year. Back then the Projectionist Union was in total control and we were paying those guys around a $100 per hour and we had to pay for two guys and only 1 was required to show up. The movies were booked on % deals and we made nothing on them, it was all on concessions,, that why stuff is so darn expensive even today at theaters. Finally a few years later General Cinema broke the Union control because they had enough clout and money to fight them. When M&R ran it for my family, they used to try to keep it open during the winter but it wasn’t profitable doing so. The indoors had much better sound and pictures as well and back then people wanted the quality and didn’t realize the historical perspective of losing drive-ins. M&R walked away after 1982 because they couldn’t make money so my family took it back and I ran the theater the last 3 years it was open, with several other family members. I do not remember any flooding issue that you talk about and I was there pretty much everyday during the season from April thru October. The site as well was and is developed into what I believe is a giant industrial type building, but I know the land is not vacant today. If my memory serves me correct the “Grand Opening” featured the original “Planet Of The Apes” movie.

A more accurate address (at least in terms of Google Maps) is 880 S Rohlwing Rd (HWY 53). The site of the drive-in is where “Ferguson” is now located, a large building. A strip mall is located on the east side of the property next to HWY 53. https://goo.gl/maps/2nidJ

I worked as a concession manager at the drive ins during the 70’s and 80’s for Concession Services. Cascade, The Twin and Sky High were 3 that I worked mostly. I do not recall any problems with flooding at any location. I also remember M&R managing some of the Theaters. I think a lot of people get confused between The Twin and Sky High.It’s been many years but if I recall Sky High was off 53 and The Twin was farther north. So much has changed over the years it’s hard to recognize any area. Last I heard the Cascade which is west of Sky High is still open and run by the same family. I really enjoyed those years working with mostly high school teenagers and still hear from a few.

And I was on of those who worked for you Margie. Summer of 1978, with Skip Leuzzi.

Miss the drive ins but mostly the people. Hope the years have been good to you. Last time I saw Skip’s father was at my wedding in 1982. He was an amazing boss. I am now retired living near Pittsburgh, Pa.

I went to drive-in’s often when i was younger. I enjoyed them better than the regular shows. I enjoyed everybody’s comments. I had heard that some drive-in’s were closed because they were showing movies that had nudity in them and they could be seen from the road. Does anybody know if there is any truth to that?

I only recall one outdoor that had to put up high fences to hide the screen from passing cars. It was in the Elgin, Illinois area. They were noted for skin flicks.

Most out door just were not making the money to keep going, the number of shows that could play during one night plus add the winter season in northern states.

I believe the Cascade is still family owned and operating.

I was a “field attendant” for a few years at the Ski Hi in the mid 70s. We drove up and down the aisles, watched movies, chased cars coming in the back gate, let people in, caught people hidden in the trunk, broke up disputes, met my first girl friend, walked around with a doberman pincher. It was a very interesting time for me as a 16 year old kid. Any other FAs out there. I remember Randy and John, and Donna in concessions.

I don’t recall a John or Donna, may have been there before or after I was concession manager. I left Oct of 1982 after I married and moved out of the area. I had worked at other locations since 1972. If it’s the Randy I know he is my nephew and worked for me as did others in my family and their friends. Randy is now in California, has a beautiful family and is a teacher. His brother Ray, that also worked with us lives with him.