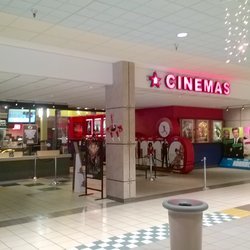 Located in the Country Club Mall which opened in 1981. The Country Cub Cinemas opened on June 24, 1981 and was operated by AMC Theatres.

This was initially an AMC Theater

2 links confirming that it originally opened as AMC Country Club Mall 6. The December 7, 1998 Cumberland Times newspaper indicates Pixar’s “A Bug’s Life” playing at the AMC Country Club Mall 6. So opened some time before then. AMC closed it July 17, 2011 prior to a lease that ended July 31, 2011, and it reopened as Country Club Cinemas managed by WPA Theaters in August 2011, increasing the screen count from 6 to 8. WPA intended to keep the AMC staff, via the mall’s Wiki page.

The mall was sold at an online auction in November. Only remaining major tenant is Walmart so the future is unknown.

This was opened by AMC with a “Screen Test” on June 23rd, 1981 and the official opening the next day. Grand opening ads posted.