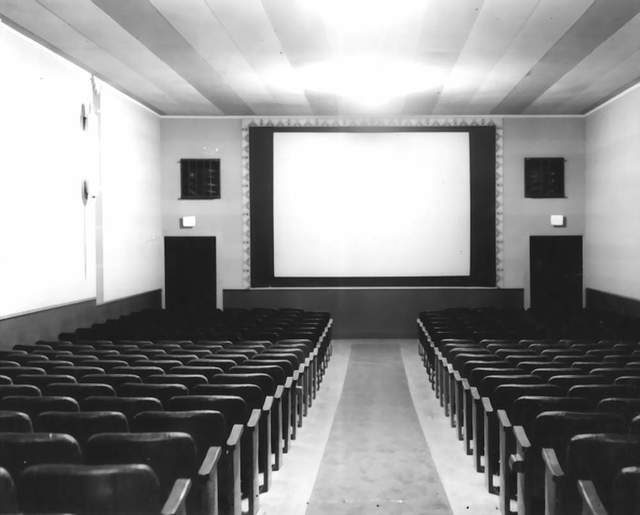 Located in Phillips Camp on the Texas/Oklahoma border to the north of Borger, TX. The 66 Theatre opened on March 8, 1940. It was still open in 1949.

This web page from the Phillips High School Alumni Association says that the 66 Theatre closed in 1949.

“‘66’ and Phillips Did Not Open Same Day

“Phillips, Tex. — It is pointed out that the Griffith ‘66’ Theatre and the Phillips, owned by Smith and Bearden, did not open on the same day, as was reported March 23. The source says the ‘66’ opened on Friday, March 8, and that the Phillips opened Sunday, March 10.”The web site I cited in my first comment says that the rival Phillips Theatre closed following a fire in 1940. It doesn’t say that the house ever reopened, and notes that when it closed in 1949 the 66 Theatre was the only movie house in the town.

The town of Phillips is now a ghost town. After reaching a peak population of 4,250 in 1947 it gradually declined. A refinery explosion in 1980 led further declines, and the Phillips Petroleum company, the major employer, bought the land it ha leased for its facilities and the land the town’s businesses and homeowners had leased individually from the same lessors, and forced the population out.

It’s impossible to be absolutely certain of the location of the theater by judging from historic aerial photos, but the town’s small commercial district appears to have been concentrated along a short stretch of Whitenburg Avenue. In a 1951 aerial shot the shadow of a building on the south side of Whitenburg just west of C Avenue has the shape of the theater building’s upper section as it appears in the vintage photo, so my guess would be that’s where it most likely was.