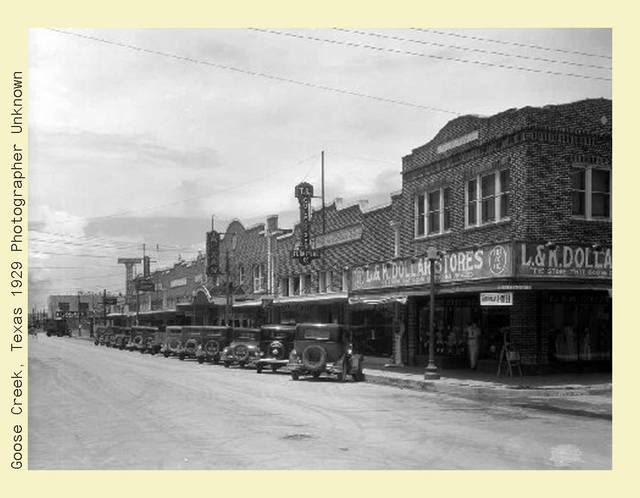 The Texan Theatre was opened in 1926, when the area was still called Goose Creek, Texas. I have two photos from that era. By 1941 it was operated by Paramount Pictures Inc. through their subsidiary Julius Gordon. The Texan Theatre was still open in 1955, but had closed by 1957. The original facade was removed when it was remodeled into the current restaurant Cork Grinders.

There is little information about the Texan Theatre, except photographic proof that it did exist. Photos on the Traces Of Texas Facebook page, and comments from those who remodeled it.

Actual consolidation of the Tri-Cities began when Pelly annexed unincorporated Baytown under the rules of home-rule charter on December 7, 1945. The population of Goose Creek was 9,928, and by the annexation that of Pelly became 11,030-large enough to annex Goose Creek under state law. After a legal struggle, consolidation became a reality on January 24, 1948. With the adoption of the new charter of the city of Baytown, Goose Creek ceased to exist as a separate town.

Below is via the Traces Of Texas Facebook page.

Opened in 1926 by Howard E. Brunson when Huey & Frotenberry built Goose Creek’s second commercial block. Burnson would close and demolish his other silent-era house, the Palace, when sound films came around. Brunson wrote that he closed the Texan Theatre in February of 1953. It may well have re-opened under other operators.