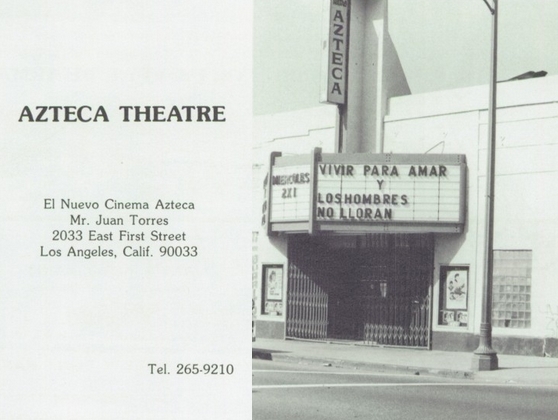 The Meralta Theatre was one of many independent theatres that once lined the streets of Los Angeles. It was opened prior to 1918. By 1957 it was operated by Aladdin Enterprises.

Known as the Teatro Azteca from January 19, 1981 when it began screening Spanish language movies. It was closed in 1988. The theatre building today houses a church.

Here is a 1983 photo. Teatro Azteca should be an aka.
http://tinyurl.com/datzxb

I attended the meralta theatre when I was a child and was facinated by this site and the old pictures.
There was a theatre across the street from the meralta called Joy that was owned by the same group.
Apparently after Jack Berman filed the lawsuit the parties got together and were partners in all the theatres in east LA.
The only names that come to mind are Meralta,Joy,Wabash,National andI think there was one called Brooklin.
Really enjoyed the pictures.

Please note my comment of 4/4/09 regarding the aka of Teatro Azteca.

Rongee: The other four theaters you remember are all listed at Cinema Treasures:

The Meralta Theatre entry at the useful web site Los Angeles Movie Palaces says that in the 1914 city directory a house called the New Lyceum Theatre was listed at this address. However, the L.A. County Assessor’s office says that the building that housed the Meralta Theatre was erected in 1924, with an effectively built date of 1930 (indicating a major alteration or repairs that year.)

I don’t have access to the 1914 city directory, but neither the 1915 nor the 1923 directory has a theater listed at this address. The New Lyceum was most likely a short-lived storefront nickelodeon in a building that was demolished long ago.

I’m a bit disappointed by this. The August 7, 1912, issue of the journal Architect and American Architecture had an item saying that architects Noonan& Kysor were drawing plans for a 1-story movie theater of about 800 seats in Boyle Heights. I thought I’d found the architects of the Meralta, but the building’s age eliminates that possibility. Assuming the projected theater got built, it was one of the several other neighborhood houses in the Boyle Heights district that were operating by 1914 or 1915. It’s going to be hard to track down which of them it was, and the odds that it still exists are low.

I don’t see how it was built in 1924 unless it was just a remodel of the New Lyceum building. Mysteries!

Thanks, Bill. I must have overlooked the Meralta’s listing in the 1923 directory. As for the construction date from the assessor’s office, they do appear to have a number of errors in their database. This is probably one of them, unless some disaster such as a major fire befell the original structure and it was entirely rebuilt in 1924.

If you still have access to the 1918 and 1919 city directories, could you look something up for me? I’m trying to track down a theater that was reported to be under construction in late 1914, at the southeast corner of Vermont Avenue and 41st Place. It isn’t listed in any of the city directories the L.A. library has online. I don’t know what its name was, but if it ever opened the address would have been approximately 4150 S. Vermont.

The building on that site now fits the description of the 1914 project, but the only indication that it might have housed a theater is the fact that part of it is now occupied by a small church. I think the theater must have operated for only a few years, and most likely closed due to competition from two larger theaters that were built nearby in the early 1920s.

My cousins and I went around the Boyle Heights theater circuit in the late 50’s and early 60’s.I recall watching Elvis Presley’s “King Creole” there (which I hated) and also great movies like Vincent Price’s “Tingler” and Ray Milland in “The Man with the X-Ray Eyes”. The sci-fi/horror flicks were what all of us kids went for. A vivid memory was watching “Teenage Frankenstein” at the Meralta in color and that cool aqua blue t-shirt that the monster wore. Loved that place.

Most of our Saturday’s were spent at the Brooklyn and Sunday’s at the Meralta.