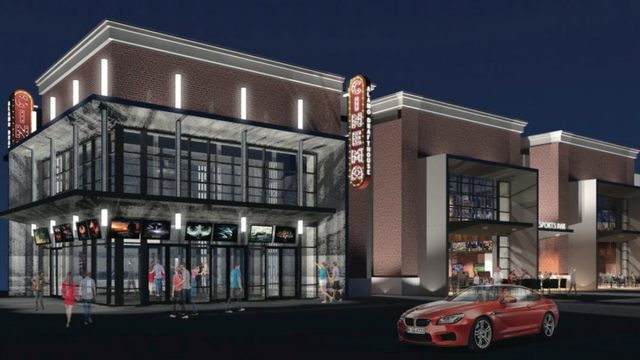 Alamo Drafthouse Cinema, with 8 screens and 806 seats, opened its first Nebraska location in the La Vista suburb of Omaha on November 2, 2015.

According to the Omaha World-Herald, attached to the theater is Liquid Sunshine, which has a sports bar theme, a giant screen for games, posters of popular sports movies lining the walls, a big menu and 48 beers on tap, many of them from local brewers. The menu includes Reuben pizza, crispy fried chicken wings and breakfast burritos.

The $11 million Alamo Drafthouse has a zero-tolerance rule on talking, texting, and cell phone use during a movie. A first offense will get a warning and the second will earn a removal without a refund. No one will be allowed into movies after the start. No one under 18 will be allowed in without a guardian and no one under 6 will be allowed in except for certain family films. Tuesday is Baby Day when children 3 or over are allowed for all screenings before 2 p.m.

In attendance for the grand opening at their 21st location was Tim League, who founded the chain with Carrie League in Austin, Texas in 1997.