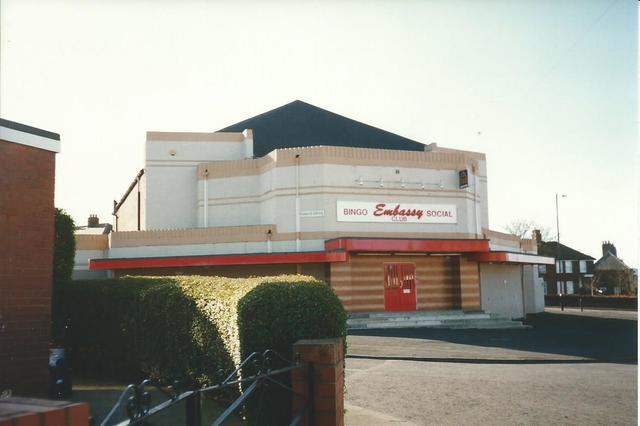 In the Denton suburb of Newcastle-on-Tyne, at the junction of Thorntree Drive and Whickham View, the Embassy Cinema opened on 6th September 1937. It was built to serve a new housing estate: 600 houses had been sold by the time the cinema opened. Seating was stadium-style with a raised stepped section at the rear, rather than an overhanging circle. The plans showed 626 stalls and 362 ‘circle’ seats, a total of 988, but, when it opened, there were only 936. There was a large car park.

The opening film was “Pennies from Heaven” starring Bing Crosby. Programmes were changed every Thursday. Although advertised as “Newcastle’s Premier Suburban Cinema”, with “Trolleybus to door”, it played to a local, captive audience, with ‘A’ features taking six months to get there after their city centre opening. By 1954, when most features were a year old, many films made before the war were still being screened.

The Embassy Cinema closed on 25th June 1960 with “A Touch of Larceny” starring James Mason. Plans to demolish it in favour of a bowling alley were not pursued, and, following refurbishment, the empty, vandalised building opened for bingo in 1963. That use continued at least until February 2000, when I visited, but that has since closed. The building was demolished in 2013. An apartment block has been built on the site.